It gets really hot here in Adana during the summer months.  July and August are particularly brutal. We're not talking a dry, desert-like heat either.  We're talking the type of humid heat that makes you feel like you're walking around wrapped in a steamy, wet blanket.

The heat is not fun when you have a two-year old who just wants to be outside.  Especially if that two-year old loves slides that burn your legs going down.  So we've done away with the park for now and found the best way to stay cool is at the pool. Since we are so close to a military Air Base, we have access to their grounds, and we have taken full advantage of the swimming opportunity.  We tend to spend quite a bit of time there and E has become quite the little water baby.  He is still a little nervous in the big pool, but he will stick out his legs and kick if you use the most encouraging voice you can muster. He's also becoming a pro-bubble blower.  However, our time in the big pool (where there are TWO diving boards and a giant water slide) is often limited, as E much prefers the safety of the kiddie pool where his feet never leave the ground and the water never goes over his head.  And of course, there are plenty of little kids for him to play with. It's also great for lap swimming, too, which I have started doing since running has become too tortuous to do on a regular basis.  I had forgotten just how enjoyable lap swimming is. Now I can't get enough.

So until the heat breaks and the temps become a bit more bearable, we will be at the pool.  Or, you know, inside with the A/C cranked high. 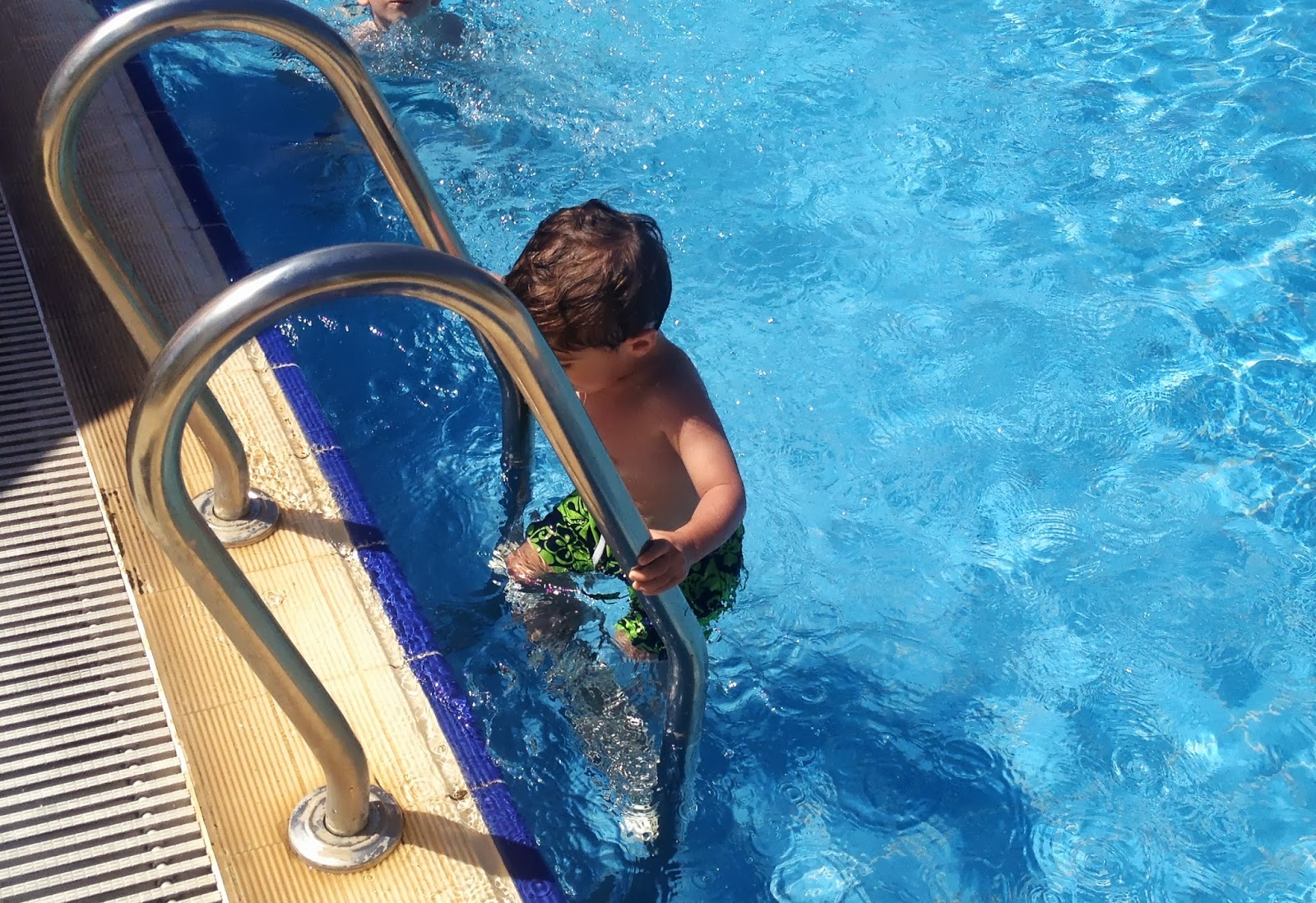 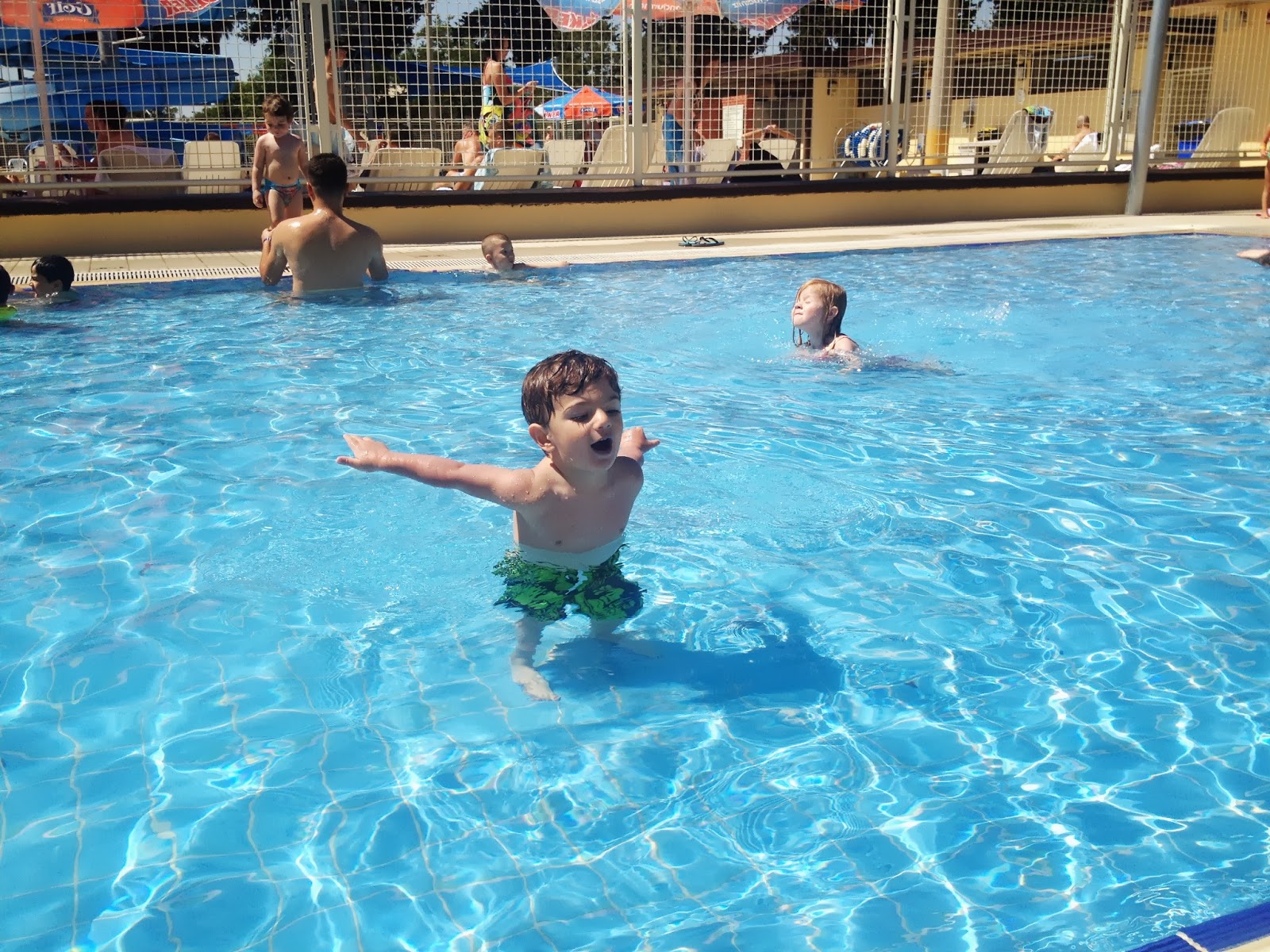 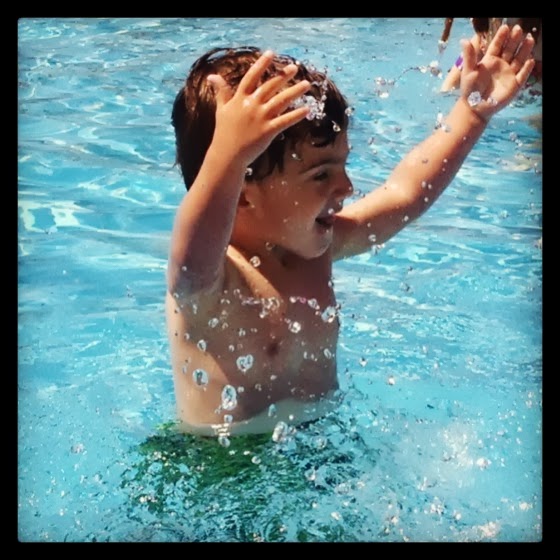 A couple weekends ago, we traveled to Frankfurt, Germany to visit with some dear friends we met in S's A-100 class last summer.  They were stopping there for a few days before heading on to their first post, so we jumped at the opportunity of proximity, and hopped a plane to see them.  It was a short trip, but it was well worth it. We are all really close, but our kids had been especially close while we all lived in Oakwood together, so it was like old times watching them laugh and play after 6 months apart. 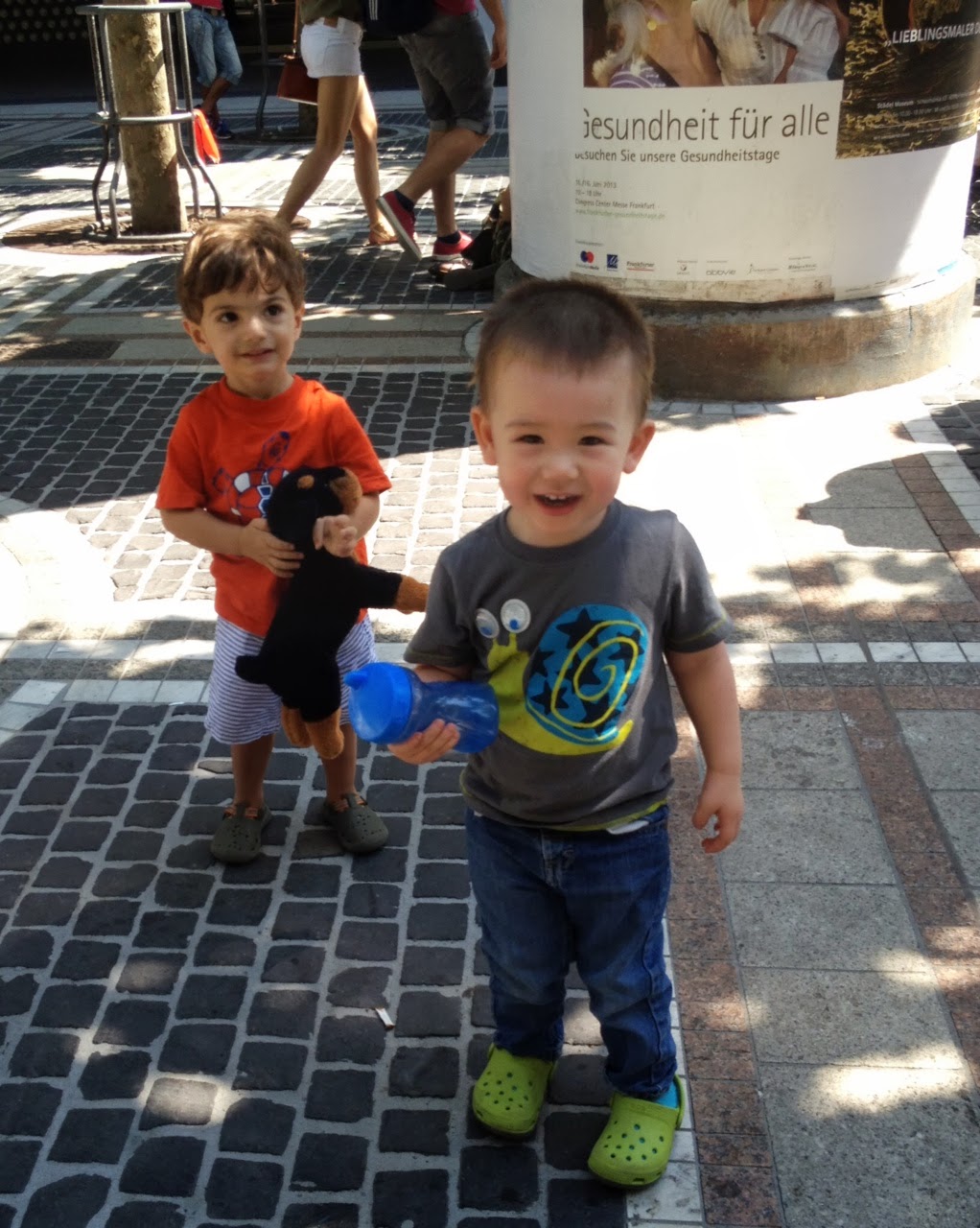 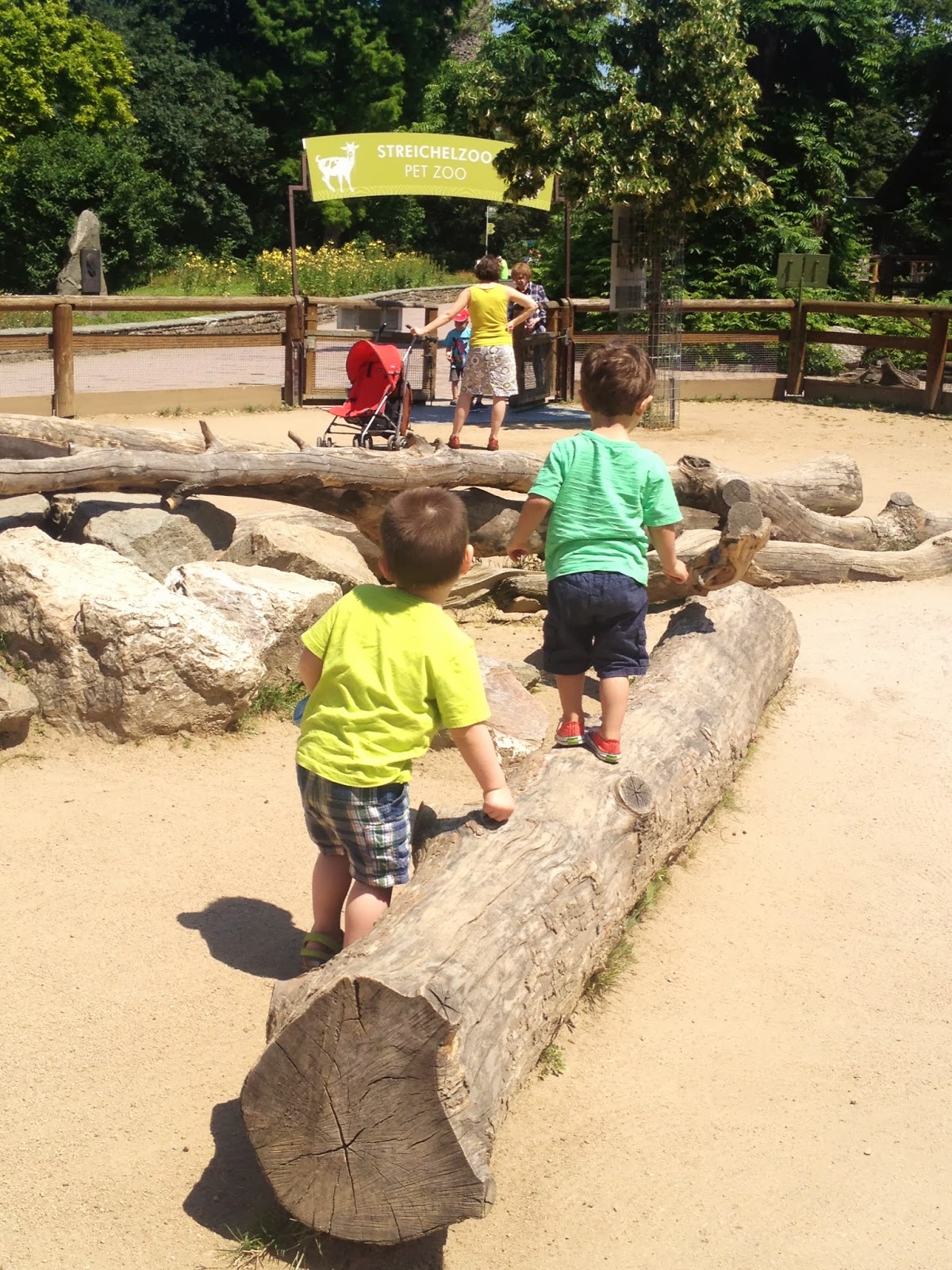 We weren't quite sure what to expect with Frankfurt because S and I had heard such mixed reviews, but we were both pleasantly surprised by how much we enjoyed it.  Maybe it was the mild weather (high 70's the whole time compared with the high 90's + humidity we've been enjoying  suffering through here) and the abundance of international cuisine that had us so excited.  I seriously love Turkish food, but after 6 months of nothing but kebabs and a random Chinese takeout place, we were ready to mix it up. But I think it was more than that.  The city was clean, the people were friendly and it had an all-around great vibe.  We dined on Thai food twice (my all-time favorite food) Japanese/sushi, German bratwurst and delicious ice cream and other assorted goodies. 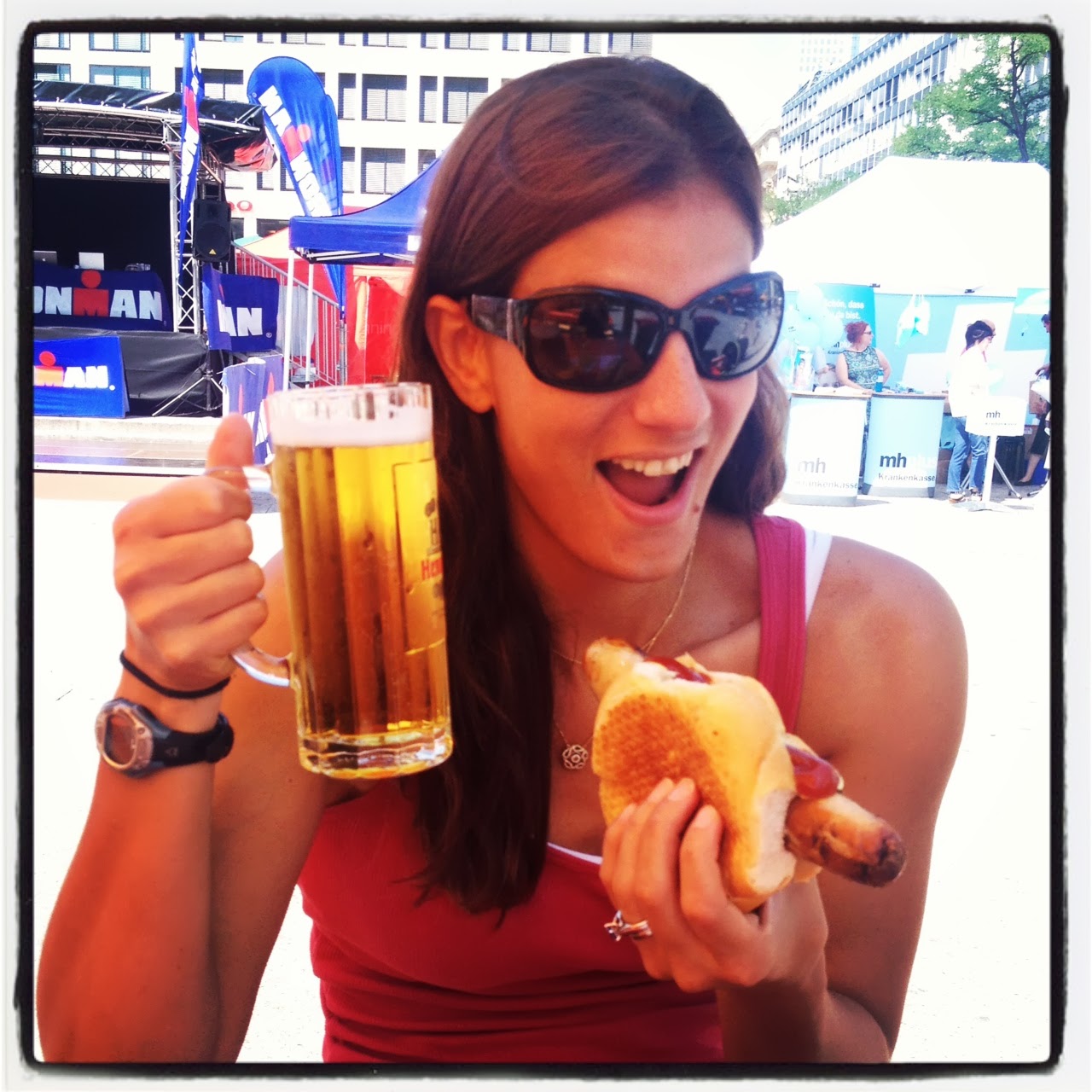 Despite the amazing public transportation throughout the city, we walked everywhere.  S and I enjoy walking while visiting new places because it's the best way to really see the city.  And with such awesome weather, we didn't have to worry about sweating through our clothes the second we stepped outside.

The Frankfurt Triathlon was going on the day after we arrived, so we walked from our hotel to the river to take a look while we waited for our friends' flight to get in.  We didn't see much aside from a few finishers who looked surprisingly not exhausted, but it was nice to plop down at a coffee shop and people watch while E napped in his stroller.

We had dinners with our friends every night, took the boys on a trip to the playground, and explored the Frankfurt Zoo together.  I was expecting a little more from the zoo, to be quite honest (you know, wild animals and tight spaces sorta make me sad) but the boys had fun. E is still telling the story about how he and M got to see the tiger and the bear.  This story is usually followed by a mighty roar before he drops down to his hands and knees and crawls around like said tiger.  It made quite an impression, apparently.


And all too soon it was time to say goodbye, but not before planning, however tentatively, our next visit with each other.  The first thing E said when he awoke on our last day was if we were going to see his buddy M.  Even in the taxi on the way to the airport, he was still asking, "We going in this car to see M?" I love that we are all so close and I love that E and M are such best buds.  And I can't wait until we see each other again. Have fun at your first post, guys!  Miss you!
Posted by L-S-E at 7:12 AM No comments: 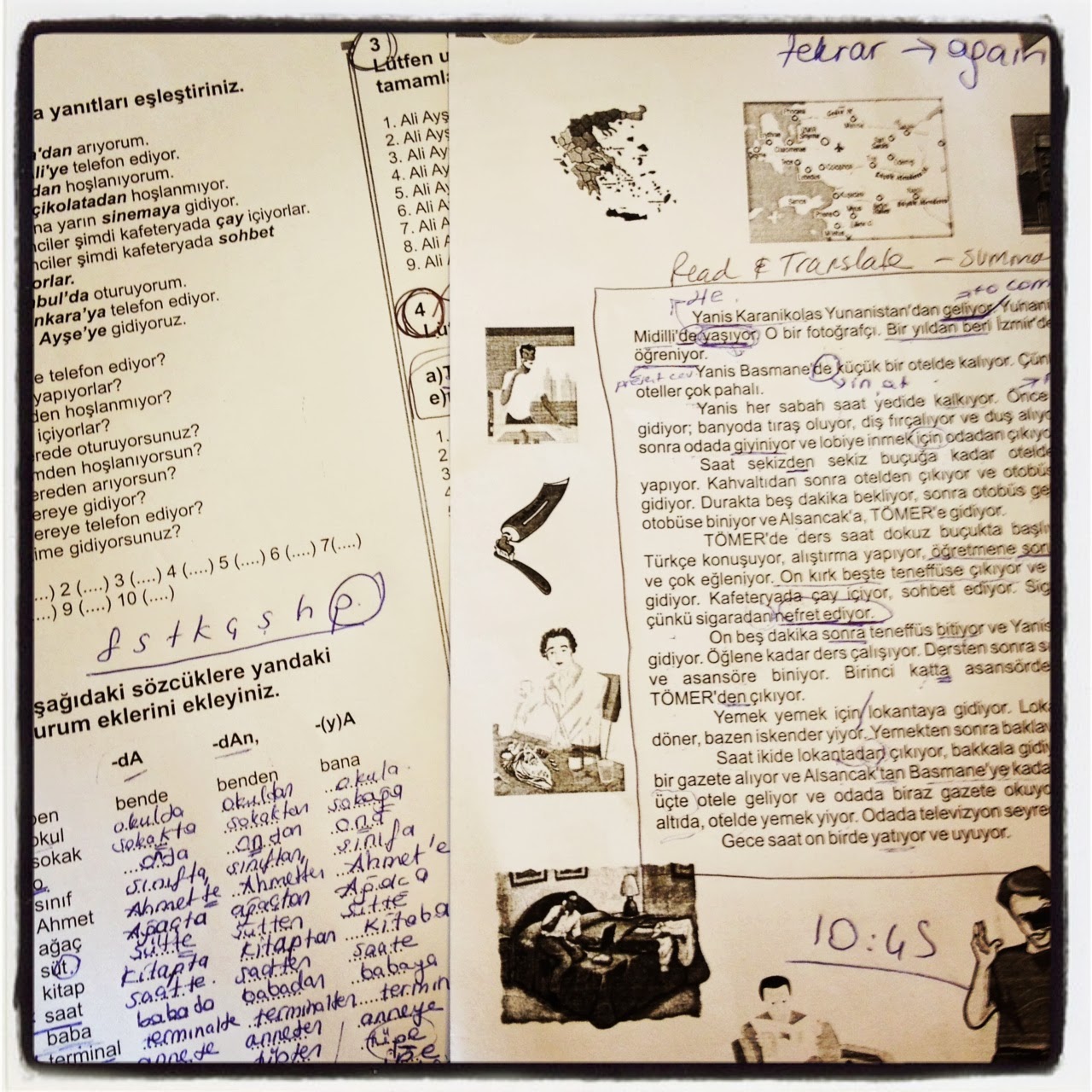 We celebrated the 4th of July a little differently this year.

Last year, we were hanging out on our rooftop in Brooklyn surrounded by friends, BBQ and a lot of cold beer, splashing in kiddie pools and watching fireworks over the Hudson River.  Our dear friends/neighbors hosted the party partly as our farewell celebration because we were soon departing for our new FS life.  It was spectacular.  Yesterday, that same neighbor posted photos on Facebook of this year's party.  I saw lots of the same faces I saw last year, and for the first time since coming to Turkey, I got a little homesick.

That's not to say we didn't have fun on the 4th this year.  We did.  We had a great time.  It was just different.  This year we celebrated not on the 4th, but on the day the Consulate hosted their party, which happened to be June 26th.  Cuz nothing says Happy 4th of July like Happy June 26th, right?  But since the Ambassador had three parties to attend (Istanbul, Ankara and Adana) each city had to schedule around each other. And because no one really wants to host an extravagant party (i.e. work) on their day off, (i.e. July 4th) they did it on June 26th.

The night was a lot of fun, but it wasn't what I was used to, by any means.  I ditched my shorts and flip-flops for a cocktail dress and heels.   I exchanged the cold beer for a cool glass of white wine, and instead of grilling hot dogs and burgers, we were eating Turkish food.  The hotel tried their best to grill up good burgers and even attempted jambalaya, but, you know. It wasn't the same.

But the mood was grand, the people were a lot of fun and despite the heat, everyone was having a good time.  The military guys came out to carry the flags and both national anthems were sung.  Speeches were made, drinks were toasted, and a whole lotta hand shaking took place.  Toward the end of the night the easy-listening piano music was replaced by a mix of American and Turkish pop, and everyone took to the dance floor in style.  And yes, I did kick off my shoes to join in the dancing.  And no, I wasn't the only one barefoot.  The night ended with S giving me the "I am so tired I will curl up right here on the ground and go to sleep if we don't leave right now" look, so we bid our farewells and headed home.  All-in-all the night was a success thanks to S's stellar party planning and management skills and the rest of the amazing Consulate staff.

So, now we have two equally different, yet equally fun and enjoyable Independence Day experiences to look back on with fondness.  Celebrating the awesomeness of this country and sharing it with different cultures is what this holiday and lifestyle is all about.  Next time, however, I will choose a more comfortable pair of heels.