So, as our time draws to a close here in Adana, I thought it would be fun to show you dear readers some "around town" photos. This is what we see on a daily or weekly basis that makes living in Turkey fun, interesting, frustrating and enjoyable all at the same time.  These are photos from around the downtown area mostly, and near the lake in North Adana.  I would have loved to post photos from the older part of Adana, known as Old Adana, but I never remember to bring my camera or iPad when I am over there.  Just know that Old Adana sounds exactly like it's name implies...cobbled stone, narrow streets, ancient buildings and small little vendors and shops at every turn. It is very easy to get lost back there, but it is a lot of fun to explore.  If I get a chance to venture over there before we move, I will be sure to post those photos as well.  In the meantime, here is Adana as we know it day-to-day.

As I stated in the previous post, our crew hopped a flight to Dusseldorf, Germany the morning after Thanksgiving.  S and I decided last summer that we wanted to have one more fun European adventure before we move to South America, and we were craving some Christmas spirit this year. So, we did a little research and picked Germany as our Christmas destination. Turkey is great, but for obvious reasons it is lacking in Christmas spirit.  Sure, you will see Christmas trees and lights up around town, but you only start to see it after December 25th.  Why?  Because the Turks have adopted western Christmas culture (Santa, trees, lights, presents, etc.) and applied it to the New Year.  So, all the trees you see are not Christmas trees, they are New Year's trees.  And Santa brings presents on New Year's Eve. No, I'm not kidding.  E was very confused last year, when on December 31st, his school had a New Year's party where the kids got to sit on Santa's lap and open presents under the New Year's tree. He came home and said, "But mommy, I told my teachers Christmas was over. They didn't listen to me."

Anyway, we went to Germany to explore the Christmas markets and to visit with friends.  Our first stop was Dusseldorf where we met up with two very good friends and their 8-month old daughter. Lots of good conversations were had over warm cups of coffee and gluhwein, and I think it's fair to say we all ate our weight in bratwursts. We enjoyed family dinners together, including one memorable night that accidentally landed us at a fancy Thai restaurant requiring us to take off our shoes and sit on the floor. Nearly three hours later the babies were going nuts and E was about to fall asleep on the pillow-covered floor, but because we were having too much fun laughing and telling stories, we were in denial that it was time to leave.  However, we quickly paid the tab, grabbed dessert to go, and made a speedy exit as the table next to us gave one final side eye. It was probably one of the best Thai meals I've ever tasted in my life.  And all too soon, it was time to say goodbye.  Our friends made their way to Frankfurt to visit family and we made our way to Cologne.

We only spent the day in Cologne, but man, it left quite an impression on E.  Well, the cathedral did, anyway.  We saw it as soon as we stepped out of the train station and he was in awe.  He spotted the gargoyles right away and started asking a million questions.  I did my best to answer as we made our way inside, but then the inside blew his mind.  The gargoyles were forgotten and he became obsessed with the stained glass windows and statues.  He asked who everyone was, and insisted S and I tell him "their story."  Now, I have to confess, even after 13 years of Catholic school, my knowledge is a bit rusty.  I mean, sure, I can tell you the ins and outs of Jesus and Mary and the disciples, but all the saints?  The popes?  Not so much.  And this is what E kept asking about, so I did my best.  He also insisted on knowing the story of Jesus over and over again.  S and I realized we have done a real bang-up job introducing religion into our kid's life (insert sarcasm) and decided that even if we have our own doubts about certain things, we should at least educate E on the finer parts of religion. Especially since the boy loves a good story and the Bible is chock full of them.  Although, does anyone else worry about describing Jesus' death to a 3-year old?  Because I found myself being very tip-toey around that subject. Of course, E picked up on that right away and insisted I tell him "really how he died."  So, I did. And after a few moments of silence E asked a million more questions.  I kid you not when I say we spent nearly an hour in that cathedral and went back two more times before getting back on the train to Dusseldorf later that afternoon.  And no, he hasn't stopped talking about it since.

After our day in Cologne, we took the train to Berlin.  The four hour train ride was rather pleasant, but we realized 3.5 hours into the trip that there was a separate family car that is closed off  from the rest of the train, and would have made our trip just a tad less stressful.  We would have been able to let D crawl around and let E talk as loudly as he wanted.  Oh well, you live, you learn.  It was still fun seeing the German countryside, and we even caught a glimpse of snow.  Another close friend lives in Berlin, so we spent a lot of time with her.  She did an amazing job researching kid-friendly places for us, and was very patient when the reality of traveling with two kids and a stroller slowed things down. Still, we went to a fun children's museum, walked by the Brandenburg Gate, saw the U.S. Embassy, the East Side Gallery where part of the Berlin Wall still stands, and toured the Checkpoint Charlie museum.  S and I could have spent all day in that museum, but alas, children don't allow for such luxuries. Despite the cold and rain, we had a fabulous time.  Germany is an amazingly beautiful country, and we are so glad we got to experience it.

And now, because I know you're just dying to see them, here are a gazillion photos from our trip. Enjoy! 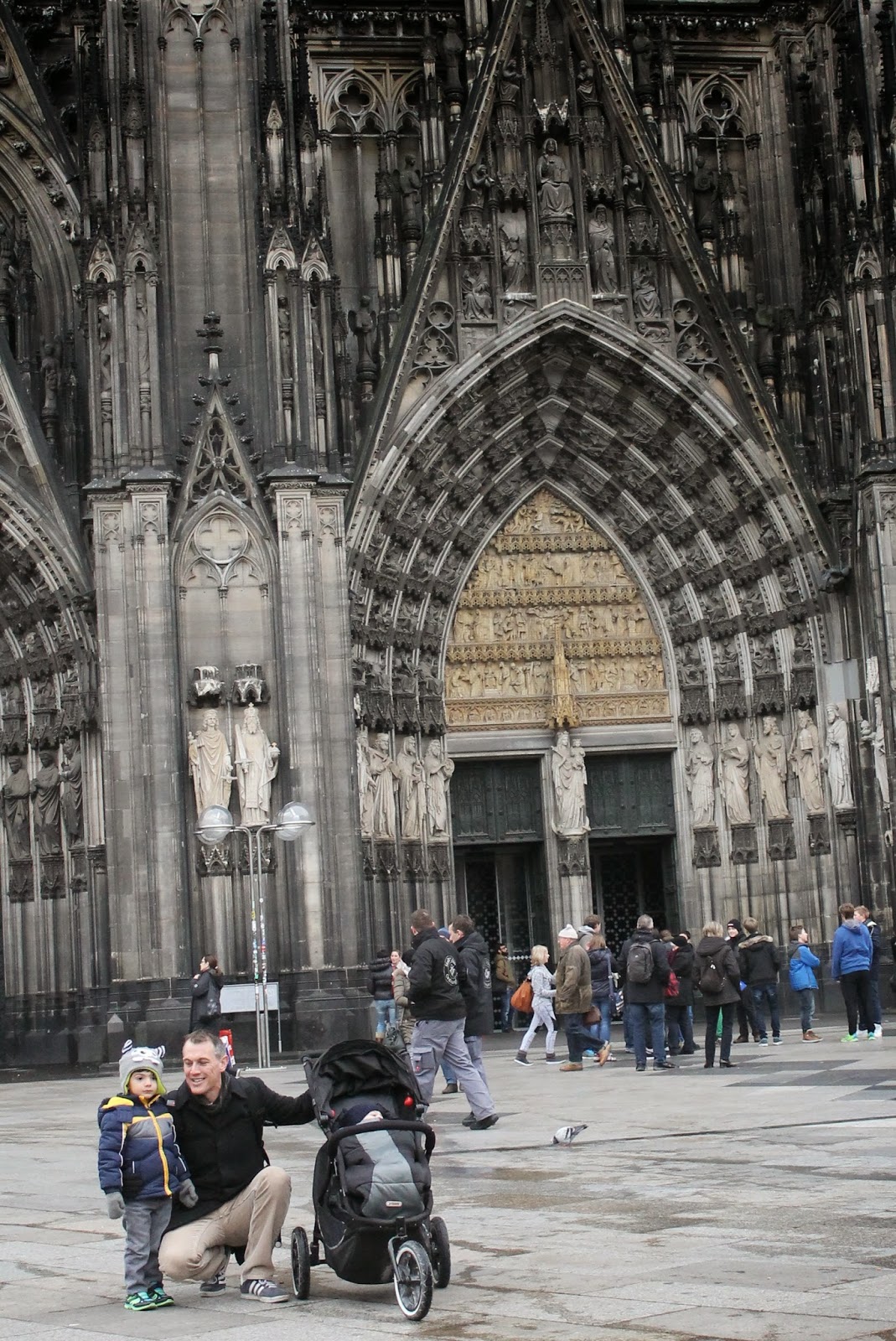 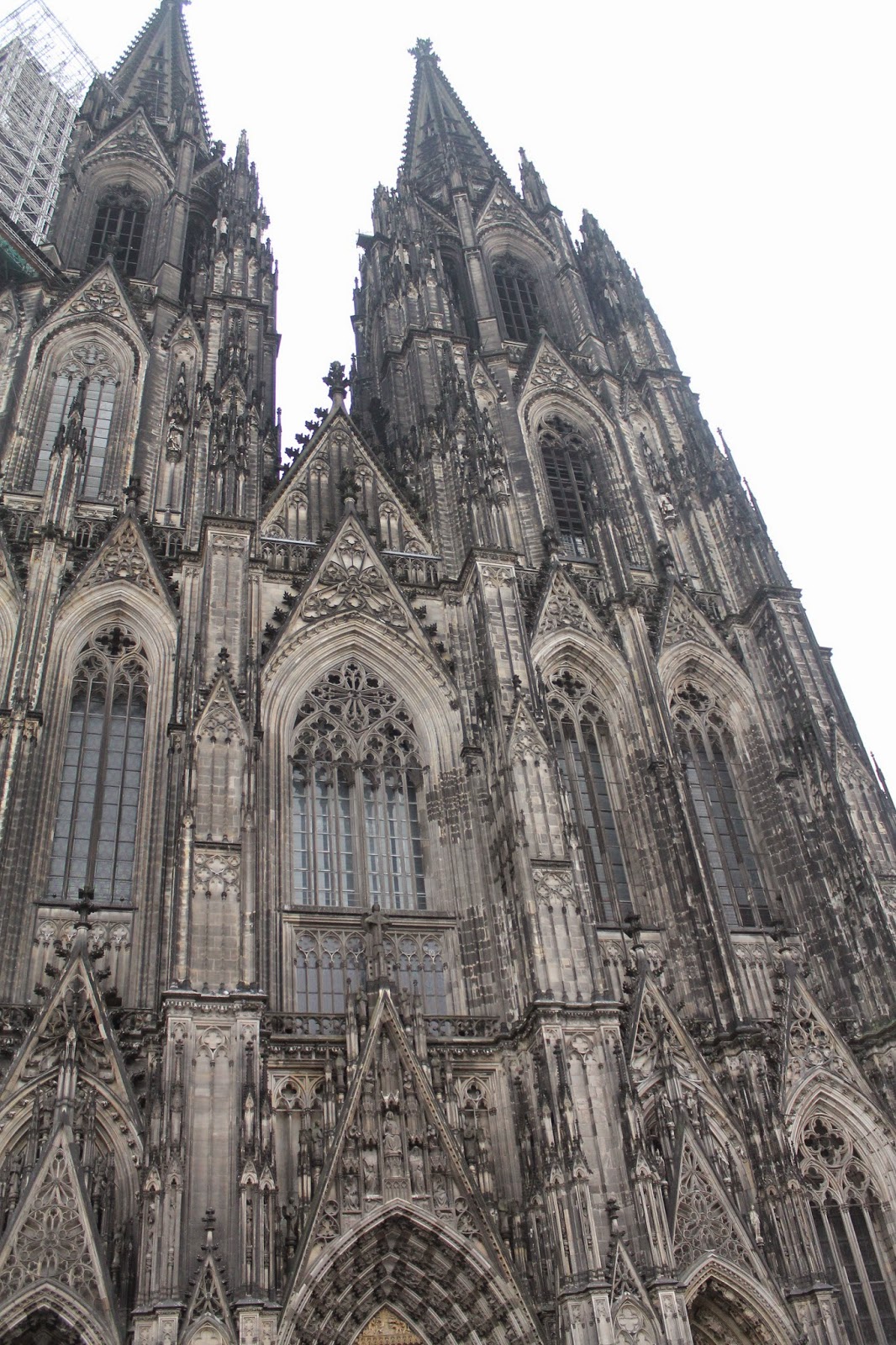