Last weekend the embassy hosted a summer fest/early 4th of July party for embassy staff and their families.  It was my first trip out to the embassy, and it was cool to finally see the grounds.  It's a lot larger than the tiny little consulate in Adana, that's for sure.  The festival kicked off with a patriotic themed parade, which E got to ride in.  He wore his Captain America t-shirt and waved a little American flag.   They had food vendor tents set up selling pulled pork sandwiches, chicken wings with mac 'n cheese, hamburgers, and even Krispy Kreme doughnuts  Yes, I indulged.  Don't judge me.  I'm 6 months pregnant.

They also had bounce houses and slides, along with carnival type games set up for the kids.  E won a lollipop on some dart-throwing/pop a balloon game.  He was thrilled. D enjoyed playing in the little bounce house and ball pit set up for the little kids.  And E braved the slide, which shocked both me and S.  We thought for sure he would chicken out, but he didn't.  He went down at least 20 times before he finally got bored and moved on.

It was a fun day.  We even got sun burns!  The sun's rays at this altitude are nothing to mess around with.  Sunscreen for everyone next time.

In other news, my boys are learning Spanish!  D can actually say three words now: Hola, Agua and Gracias.  And E comes home every day with new songs that he has memorized and new phrases or words that his teachers taught him.  It's time for mom to get on the ball and start taking lessons of her own!

Gold! And Other Sightings

Last weekend we decided to check out the Museo del Oro (Gold Museum) that we have heard so much about.  E was excited when he went to bed the night before claiming he couldn't wait to see "all the gold they stole from the king" (umm, ok), and then reflected on the fact that while we weren't going to a dinosaur museum, a gold museum was just as cool. Just keeping you happy, kid.

The museum is located in the historic area of Bogota, a pretty good trek from our neighborhood. Since we still don't have our car here, we hopped in a cab.  The drive up was beautiful and really gave us a chance to see more of the city, which I really enjoyed.  The museum itself was pretty impressive given all the history, but I have to admit, it got a bit repetitive.  That didn't deter E, who, of course, made up some crazy story about every piece of gold he saw.  He also carried around the brochure looking specifically for the gold statue featured on the cover, something he had to see before we left. Once we found that, it was time for a quick cup of coffee and lunch.  D was in rare form because he was so exhausted, which made for a rather interesting lunch, but we survived.  I even got to duck into the gift shop to dream about all the gold jewelry I was not willing to pay for.

After we left the museum we decided to stroll around the historic area to see what we could find.  We forgot our guide book at home and had no clue where we were going, so we didn't stray too far from the museum.  There was a LOT of construction going on too, which made the stroll more of an off-road adventure, but we eventually found some cool old churches and Plaza de Bolivar/ Bolivar Square. D fell asleep during his off-roading trip in the stroller, so unfortunately he missed out on all the action, but the rest of us had fun.  And I was just glad a pigeon didn't poop on anyone's head. 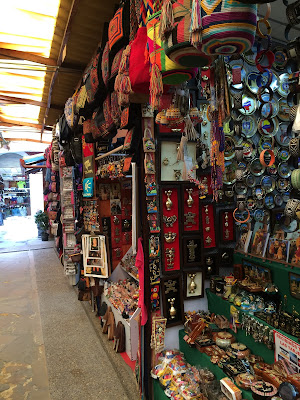 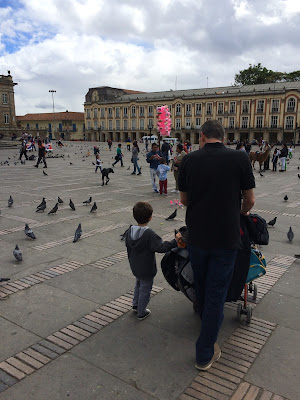 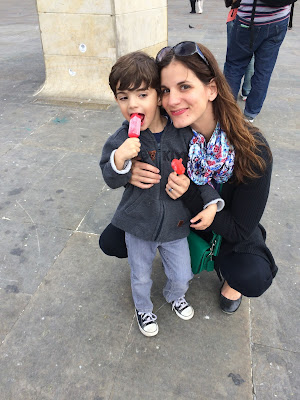