Halloween was a blast this year.  That's not to say we didn't have fun last year, because we did, but this year was particularly fun because a). E got to do real trick-or-treating b). he was actually old enough to understand the holiday and know what was going on and c). there was a party for adults too!

We kicked off Halloween week by going to a Fall Fest at the airbase about 25 minutes from our apartment. The fest, which was more than we expected, was complete with a bounce castle, funnel cakes, hamburgers and a haunted house.  We didn't go into the haunted house even though E was begging us to take him (the kid has a serious obsession with ghosts and monsters), so we let him run around the playground and jump in the bounce castle instead. That seemed to distract him long enough because he forgot about the haunted house and never looked back.  Apparently E could bounce in a one of those all day if we let him.  Only the promise of face painting was strong enough to lure him away.

Then on Halloween night, we went back to the base with a group of Consulate families for a little trick-or-treating.  Several neighborhoods were participating in trick-or-treat, so we chose one of the more popular spots and let the kids have at it.  Was E scared or nervous or shy?  Um, no.  I think the kid was born to celebrate this holiday.  On the drive there he was convinced witches were following us on their broomsticks, which he found hilarious, and when we arrived, he boldly walked up to every house and screamed trick-or-treat as loud as he could.  We had to remind him to say thank you, but he eventually started saying it on his own.

My favorite part of the night was when he walked up to a house with a woman (dressed as a black cat) handing out candy, and a very still, statue-like man sitting next to her in a wolf costume.  E took his candy, said thank you, then turned to the wolf (who had still not moved at this point) shook his hand and said, "Hey! You're the Big Bad Wolf!"  The wolf/man was so surprised that he took off his mask just to get a better look at this tiny little child who had just befriended him.  His black cat wife said he was the only kid who was brave enough to come near him all night and proceeded to reward E with extra candy.  Now, I love my kid,  but I don't know whether I should be concerned or proud of his "bravery."  But, I'm telling you--Halloween is his holiday.

The night ended with E clutching his bag of candy with all his might and telling us all about the fun he had. And with me kicking myself for not snapping a picture of him with the Big Bad Wolf. 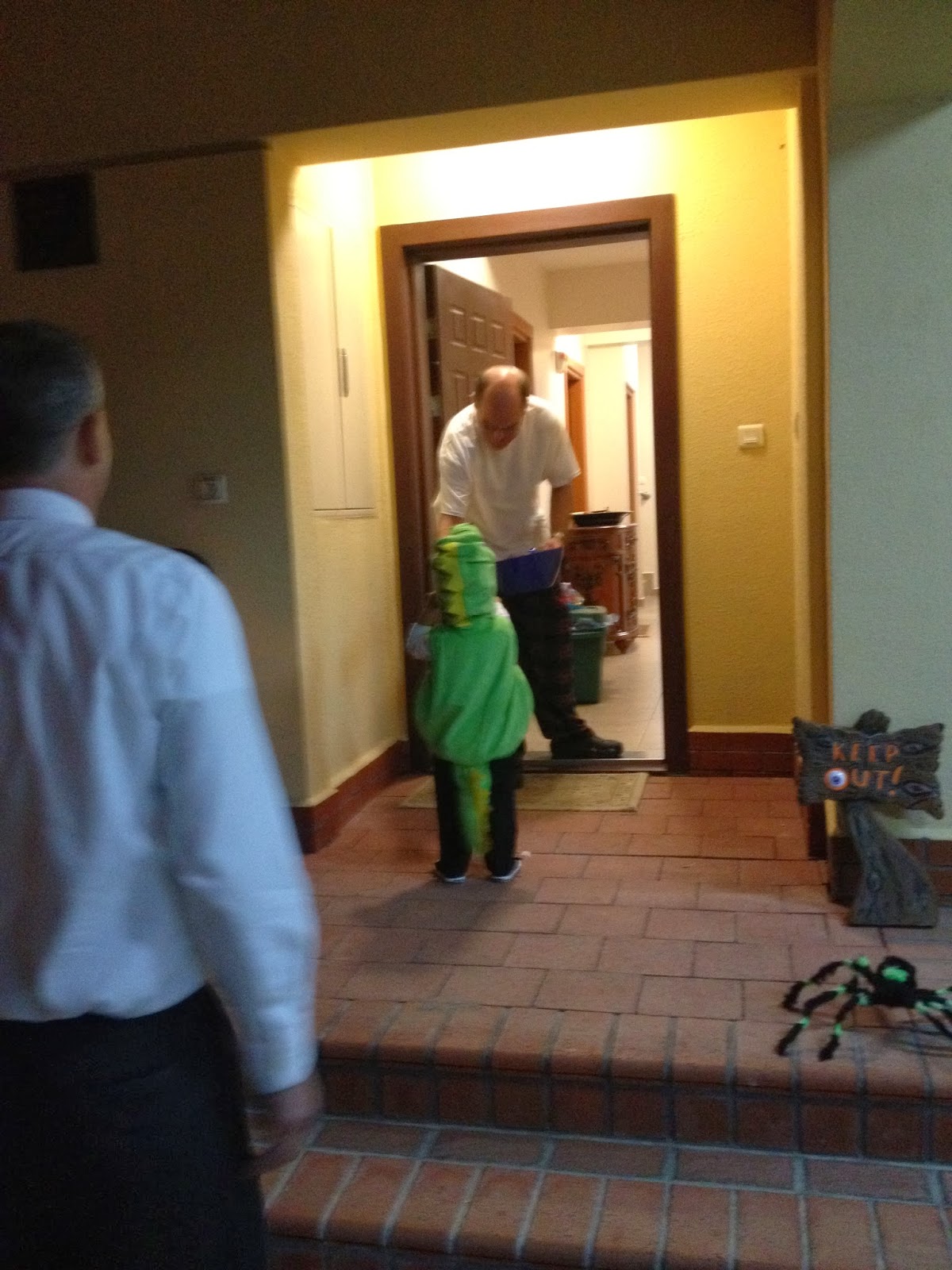 The following evening, all the adults got dressed up for their own night of partying.  The Consulate hosted a Halloween bash at a local restaurant with a beautiful view of the lake.   Everyone came in their best costumes, including me and S who dressed as Buddy Holly and his Sock Hop Girl.   I think the party started out a bit slow, but once the lights dimmed and the music started blaring, everyone let their guards down and had a blast.  My favorite part of the night was when the PD officer and I tried to teach the Principal Officer and a few of the local staff how to do the Time Warp.  Because what's a Halloween party without a little Rocky Horror Picture Show!?

I can't wait for next year's party.  S and I are already discussing costume ideas...