We don't drive our car very often, mostly because Uber is just so dang easy, but also because our neighborhood is pretty walker-friendly.  There are parks and malls and movie theaters and TONS of restaurants all within a 10-15 minute walk in any direction, so there is just no point in getting in the car. Plus, exercise.  Duh.

That said, we still like to get out of the city from time to time to check out some of the nearby towns. Twice now we have gone to two very fun and very kid-friendly restaurants that our children absolutely loved.  And they were so kitschy that I fell in love with them too.  Both restaurants are about an hour drive outside the city and each one offered it's own unique atmosphere while still managing to serve up some really delicious food.

The first restaurant we tried was a place called La Granja.  We drove out there to celebrate a friend's birthday, and just like its name implies, it is in fact a farm.  And also a restaurant.  And also a host of other things.

This is what we saw when we drove into the parking lot. 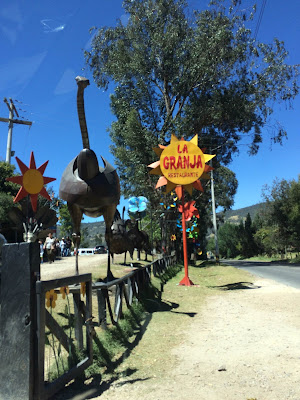 We sat down, ordered our meal and then let the kids run around and play while we waited for the food to arrive.  First stop was the ostriches.  Apparently these were cannibalistic ostriches because as a beautiful egg lay resting peacefully in the grass in their enclosure, one of the male ostriches ran over and cracked it with his beak.  Then the other two came running over, presumably to stop the male ostrich, but no.  They all started cracking at it until it was broken.  And then they all proceeded to eat the contents of the egg.  All of this was done before a dozen wide-eyed children who were of course, asking a million questions as to "why" such a thing was happening.  Even still, my kids enjoyed watching the ostriches run around (I don't think they had a full grasp on what had just happened) and got a kick out of the goats and cows and chickens that meandered around the walking paths at their feet. 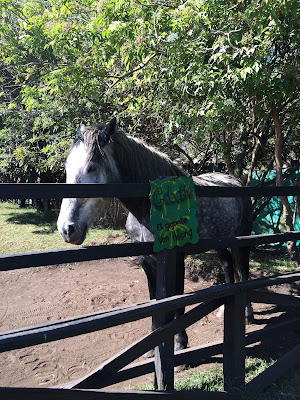 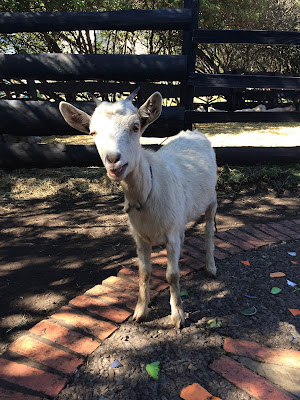 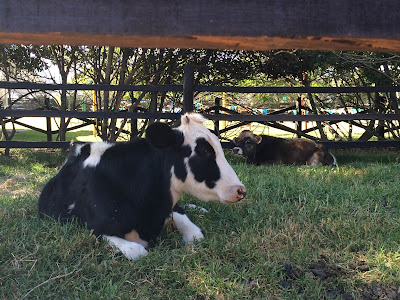 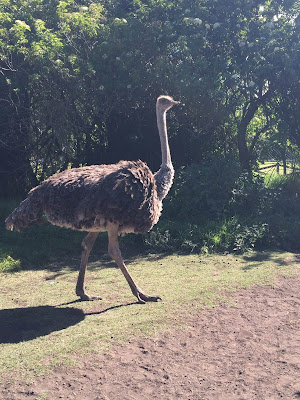 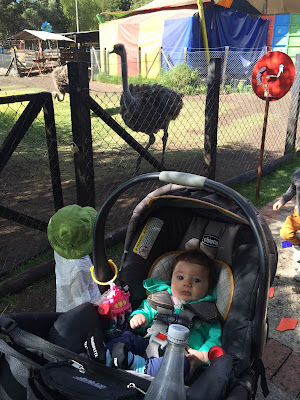 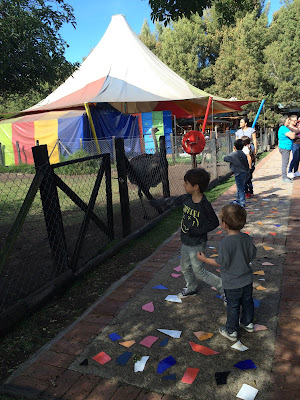 After lunch we grabbed some ice cream and went back to see the animals but also to play on the playgrounds set up throughout the farm.  There was a sand pit and slides and monkey bars, complete with swings and open fields for running off tons of energy.  We didn't try any of the other little workshops they had set up, like the carpenter area, for example, but maybe next time.


The second restaurant we visited was a place called Andres Carne de Res in a town called Chia.  There is also an Andres D.C. here in the city, about a 10 minute walk from our apartment, but the one in Chia is bigger and better.  It's kitschy and crazy.  The menu is 72 pages long. They serve just about every delicious Colombian dish you can imagine, and then some.  It is so big that it has a capacity to seat approximately 2,000 people.  And because it is so kid-friendly--because they don't want parents to worry at all--there is a very nice security system in place.  Kids are given ID's with their table's name on it as well as the kid's name.  So if your child is off playing in the sand pit, or watching a movie in the theater, or playing ping pong or rock climbing, or getting their face painted, or doing any of the other dozen or so activities without you, the parent, they will be escorted back to your table by one of the staff members when they are done. So, we let E wander and do his own thing, but we still kept an eye on D, and of course R who was confined to her car seat or strapped to mommy's chest the whole time. But we had a blast.  We had gone there on a whim with friends and their kids, so we didn't quite know what to expect, but it was amazing.  I think we were there for over 4 hours.  We drank, we ate, we talked and the kids played until they were close to passing out from sheer exhaustion.  It was a quiet drive home, that's for sure. How do you get three kids to sleep at the same time?  Take them to Andres in Chia and wear. them. out. We absolutely cannot wait to go back.