A Mother's Day and A Baptism

﻿
Today was Mother's Day.  It was also the day we had E baptized.  S and I are both lapsed Catholics so we decided to add saving the kid's soul to our ever-growing list of things to do before we move.

The day started out like any other Sunday with a quick run in the park, but it was followed up with a special Mother's Day picnic of bagels and coffee.  After that, we chased E around the playground and pushed him in the swings for a bit before taking him home for a much-needed nap.  Once he napped and we all got dressed in our Sunday best, we headed over to the church. E let us know he was not in the mood to be carried and insisted we let him walk instead.  We happily obliged. 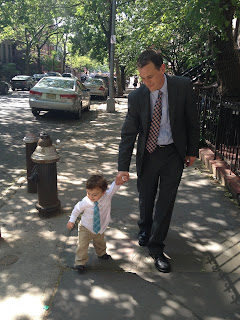 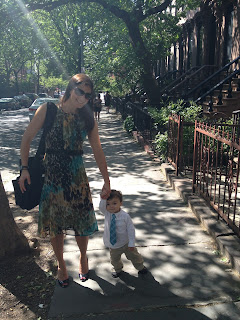 We arrived at the church, chatted with the priest for a few minutes, and let the little guy run around to burn some energy before the ceremony.  Don't worry, the church was empty.  He wasn't disturbing anyone but the Holy Spirit. He did, however, stop briefly to pose for this adorable pic.


While the little monkey ran around, we waited for my cousin and her boyfriend to arrive.  They were coming to serve as witnesses since E's true godparents don't live nearby.  Then, it was time for action.  E met with the priest...
Then the priest got down to business pouring some holy water﻿ on E's curious little head and followed that up with a big fat smooch to his noggin. E was not a fan of the water, especially after it went into his eyes, but he did a good job of not screaming or making a fuss.  In fact, I was quite proud of my little guy. 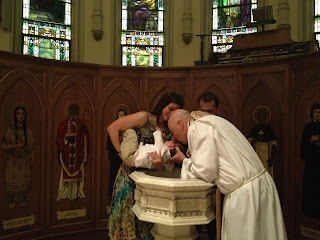 ﻿
All in all, it was a fun day.  The weather was perfect, everyone was in a joyful mood, and best of all, no cranky toddler meltdowns.  That's the best a mom can hope for on Mother's Day.

Email ThisBlogThis!Share to TwitterShare to FacebookShare to Pinterest
Labels: Family