Out And About Part Deux

This past Labor Day weekend was not lacking in fun family activities for the McGuire clan. Now that the stress of A-100 is over and the visitors have come and gone, we took full advantage of our three-day weekend to hang out with each other and see a few more sites around the D.C. area.

Saturday was kicked off with a run along the Mount Vernon trail, then we met one of S's A-100 classmates, his wife and their daughter for a lunch at a local fish market in Southwest D.C. I have been dying to have fresh crab legs since we got here, and these did not disappoint.  What did disappoint was the fact that I stupidly forgot the leftover crab legs sitting in a bag atop the picnic table when we left.  No, I clearly wasn't distracted by a busy-body little toddler who kept trying to throw rocks and jump off concrete stairs.  No, not at all.  The ones I did get to eat were really delicious, though, and I vow to eat more before we move.  We were also very grateful to our new friends for taking us to such a fun, unique place.

Sunday was spent at the Newseum, which S and I had never visited before.  Well, I take that back.  I went to the one in Rosslyn way back when I was a teenager and it first opened, but I had never been to the new one.  S and I are news junkies, so we strapped E in the stroller and braved the crowds.  Surprisingly, it wasn't crowded at all.  We started our tour by gazing at the Pulitzer Prize winning photographs, which were stunning. Some of these photographs are very recognizable and terribly sad like this Kevin Carter photo of a buzzard stalking a starving child in Sudan, but many were new to us.  As swimming fans and uber Olympics nerds, we were excited to see this photograph of Rowdy Gaines from the 1984 Olympics in Los Angeles.  And E was completely enamoured by this Don Bartletti photo that captured two Honduran children riding a horse.  He kept going back to stare at it and whined every time we tried to take him to look at other photos.  One of the Newseum greeters noticed his attraction (he was mostly transfixed by the horse) so she recommended we take him to see the First Dogs exhibit upstairs, which we did.  And of course, since our kid is in love with animals of all shapes and sizes, he wasted no time getting on his knees to give Bo Obama a big kiss on the nose. 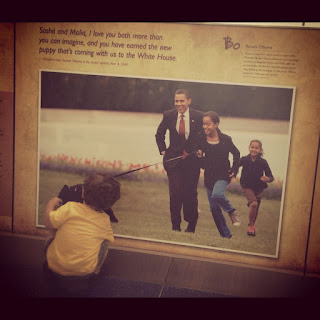 We continued to stroll around checking out the historic newspaper covers, Tim Russert's office, the journalists memorial, and the 9/11 memorial, which was extremely somber.  I wasn't the least bit shocked to see that boxes of Kleenex had been placed at the entrance and exit.  More than a decade later, and the news coverage from that horrid day still brings people to tears.  And rightly so.

The Newseum tickets were good for two days, which I thought was good because there is a lot to see.  I could have spent hours gazing at the old newspapers and watching news reels of Edward R. Murrow.  We ultimately spent more than 3 hours there and probably would have stayed longer until we heard a voice come over the PA announcing that the place was closing in 30 minutes. So we hit up the gift shop and headed out the door.  If we hadn't already scheduled to see Mount Vernon the next day, I would have used the two day pass to go back and fully immerse myself in the rest of the exhibits.


But alas, Monday dawned and we headed off the see George Washington's home.  This was a site I had visited on one of many boring totally awesome family vacations as a kid and, despite all my nerdiness, never fully appreciated at 8-years old.  Besides, S had never been and so, we decided to go.  I remembered there being lots of green grass and plenty of places to run and explore, and I was right.  There was acre upon acre of open space and pathways that allowed E to burn some energy once we had completed the house tour.  The house itself is very beautiful and according to the tour guides, was very elaborate and grand back in the day. Heck, it's still elaborate and grand even for today's standards.  But what I loved most about the grounds was the amazing view of the Potomac River from the back porch (which unfortunately I didn't capture because, you guessed it, we were too busy trying to keep up with E).

In the end, the weekend was spectacular and we were excited for the chance to see more of this beautiful city.