Last weekend we traveled to New York to spend a few days enjoying the city and meeting with friends before saying our final goodbyes to the good ol’ U.S. of A.  Two things prompted us to go: the Rockefeller Center tree had just been lit and Yo Gabba Gabba Live! was performing at Madison Square Garden.  So we packed up the car and hit the road.
e got a rather late start Friday night because S’s A-100 classmates were hosting a Happy Hour for those soon departing for post.  Since S was part of that group, he couldn’t very well miss his own party, so we stopped in for some quick mingling before getting on the highway around 7pm.  Leaving so late meant that E slept in the car for a good part of the trip (which was excellent) but it also meant we had to wake him at midnight and put him back to bed in an unfamiliar place.  We stayed with my cousin and her boyfriend, who happen to live at a busy intersection, so we listened to him say “beep beep” to the buses and cars for a good hour before finally drifting back to sleep at nearly 1:30am.
He was in good spirits the next morning, though.  In typical New York fashion, I sent S to Russ and Daughters for fresh bagels and coffee because really, New York City has the best bagels.  And I have missed bagels. I needed a good bagel.


After breakfast we donned our coats and set off for a walk around the East Village, ducking briefly into the playground at Tompkins Square Park to let E burn some energy.  He wasn’t interested in playing this time, however, and preferred to run around gaping at the dogs at the dog park. He was also completely transfixed by this couple playing ping-pong. 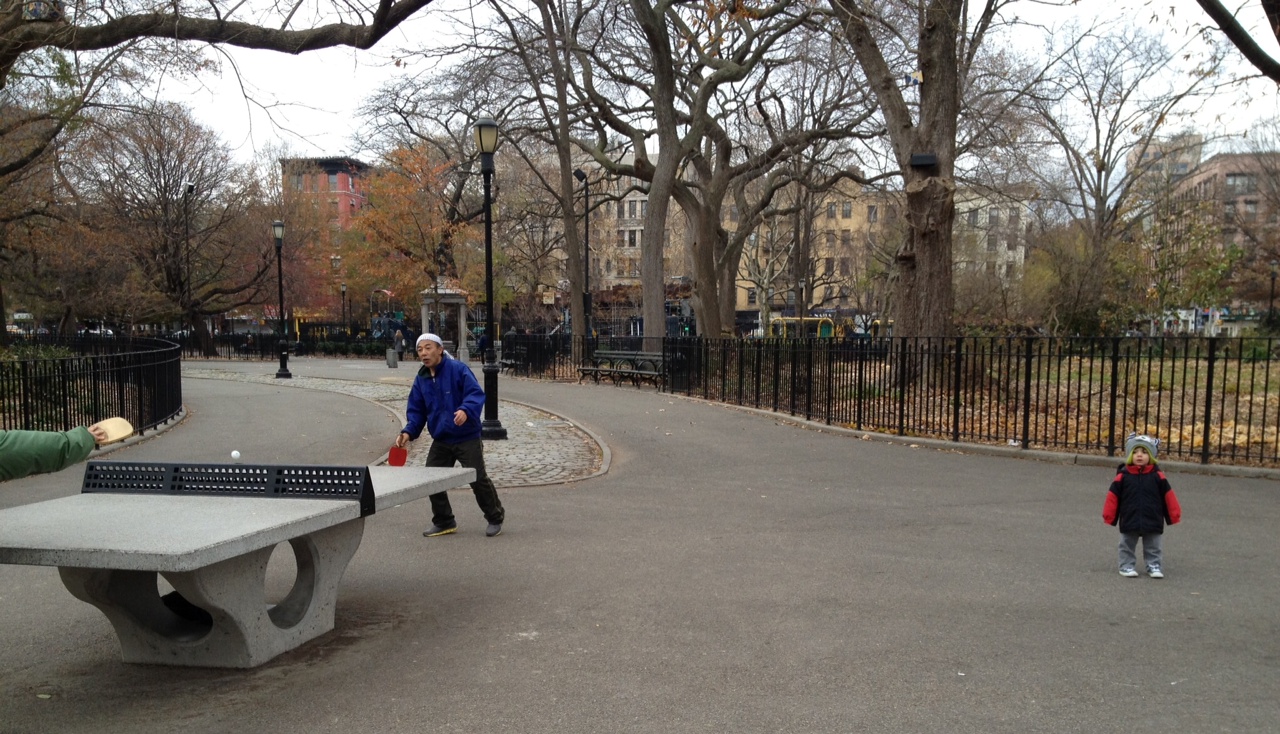 We eventually realized the poor kid was freezing (we forgot to pack his gloves) and decided it was time to head for the warm confines of the car, and go to Brooklyn.  While there, we quickly checked on our tenants, collected some mail, and then grabbed lunch at one of our favorite taco places. 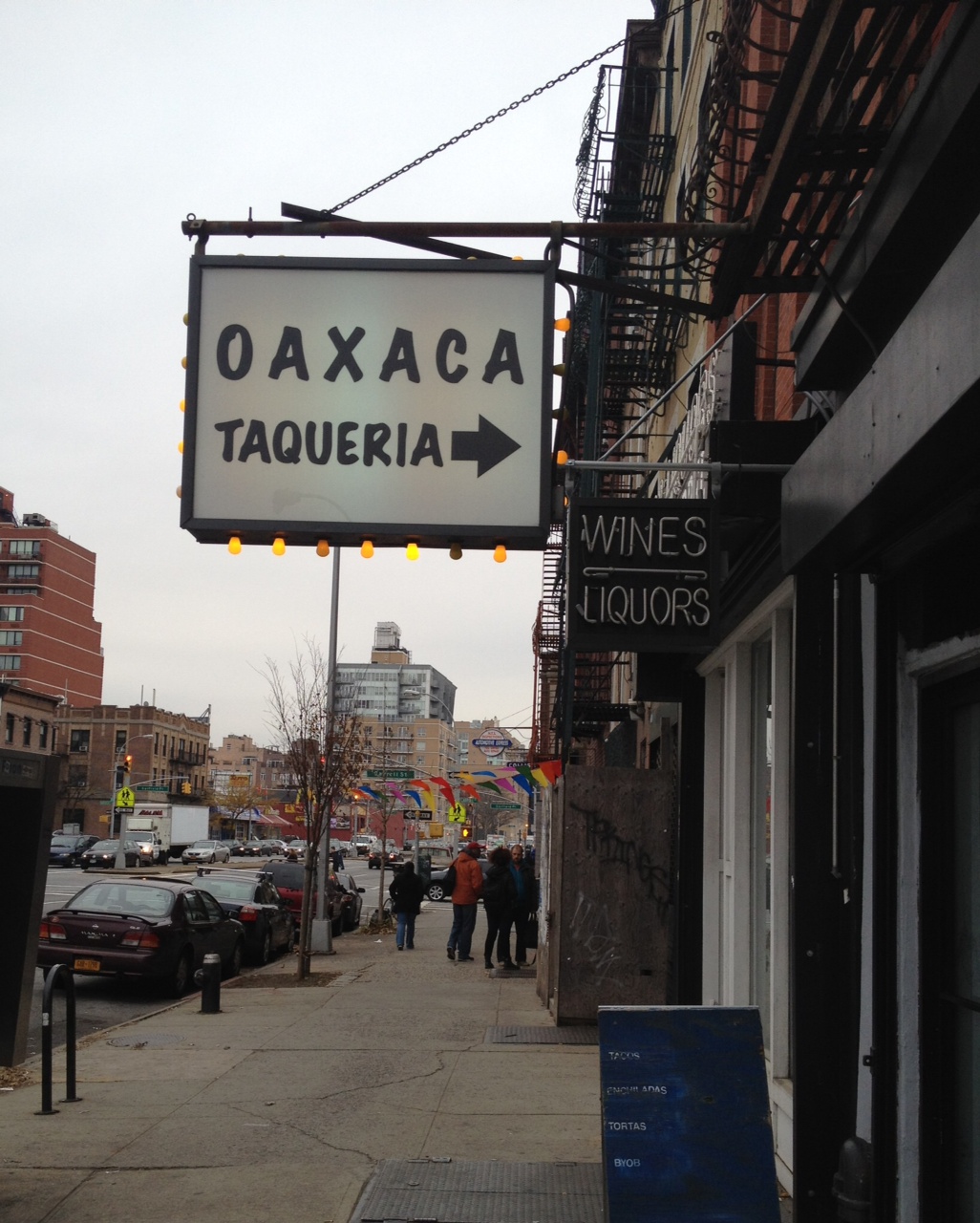 Oaxaca Taqueria is located on 4th Avenue in Brooklyn (technically on the outer edges of the Park Slope neighborhood) and S and I used to eat there all the time.  E loves it too.  The kid can seriously put back some black beans and guacamole.
After lunch we cruised over to the Brooklyn Museum where we met up with E’s old daycare buddy, B, and his parents.  E and B spent every day together from age 3 months to 15 months, but since they are still so young, and because they haven’t seen each other since July, we weren’t expecting them to have any recollection of each other.  Boy were we wrong.  Not only did their faces immediately light up in recognition of each other, but they instantly tried to escape their strollers to play with each other.  Once we let them out, they literally danced around the museum lobby giving each other hugs and screeching at the top of their lungs.  Needless to say, we were all quite shocked and amazed.  We spent the next hour and a half walking around the museum chatting with B’s parents (they’re expecting their second child in April!) and watching E and B explore, play and otherwise have fun together.  We all had a blast and we were definitely glad we squeezed in the time to see them.  Future trips to New York will always include a visit with B and his folks. 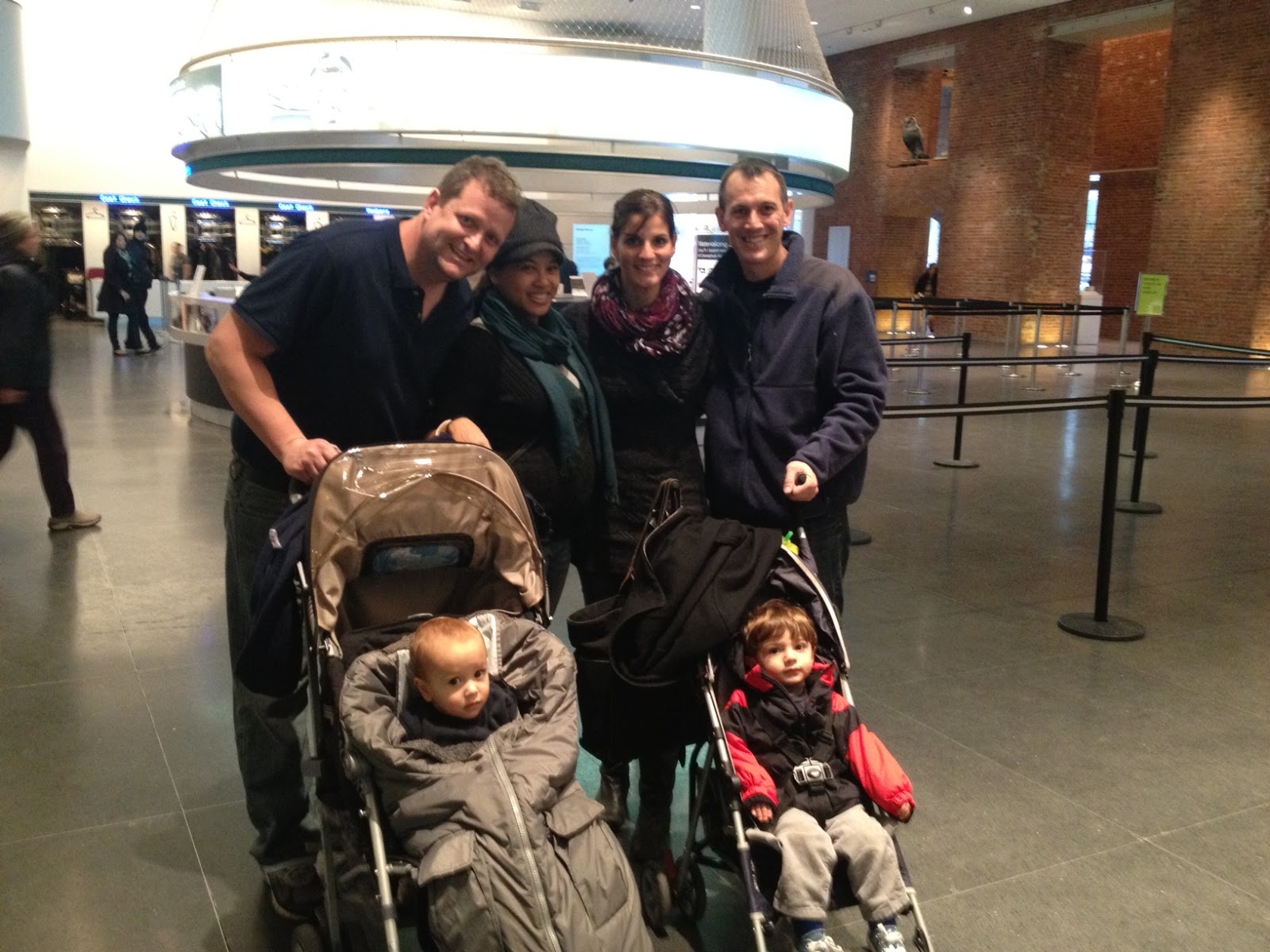 Next, we attended a basketball game at the university where S used to work.  Being there gave him the chance to see old colleagues, which was great, and E had fun watching the game (and the dancers!).  But, he started to grow restless by the end of the second half.  Books and crayons had lost their appeal and he was ready to go.
Our post-game plan was to meet up with another friend for dinner, but E let us know he was NOT having it.  We had dragged the kid all over the city and he was exhausted.  So, we scrapped our dinner plans, decided to meet for breakfast instead, and took E home to bed.  He passed out by 8pm and he slept straight through to 7:30 the next morning.  Such a little trooper.
While E slept, we ordered Chinese noodle take-out (amazingly delicious!) and hung out with my cousin and her boyfriend for the rest of the evening.  We drank wine and chatted while watching some strange show about gold miners in Alaska.  I had never heard of it before, but it was pretty interesting.  Once delirium set in, we called it a night and headed for bed.
The next day, Sunday, we finally met up with our friend for breakfast.  She was a doll for agreeing to switch plans with us at the last minute, and was completely understanding of sometimes making adjustments at the whims of a toddler.  Thank you, SD!  We will miss you! 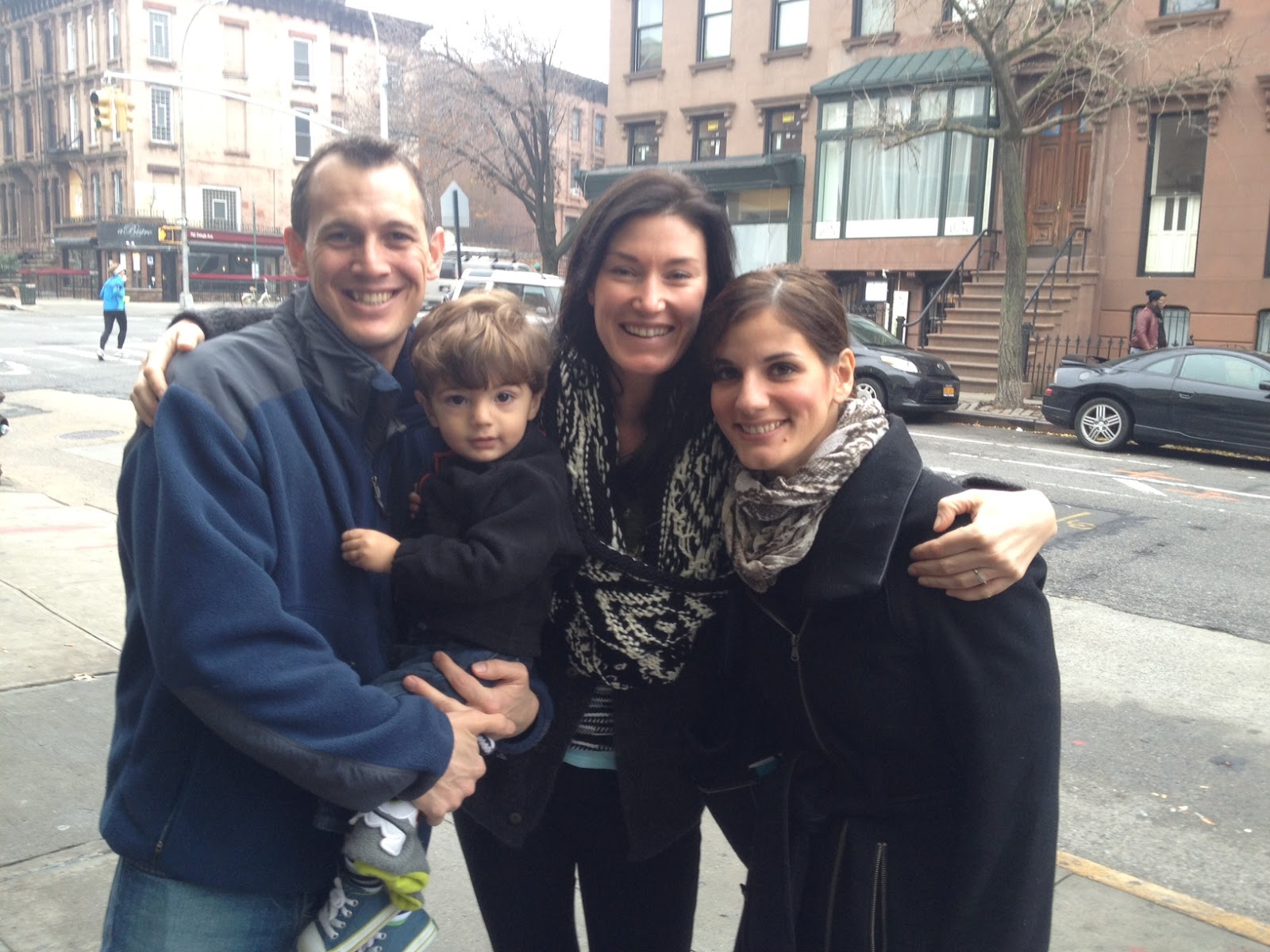 Then, the pièce de résistance: it was time for Yo Gabba Gabba Live!  As I have discussed on this blog before, E is a HUGE fan of this show. He knows all the characters by name, can sing just about every song and has seen each episode so many times that he can practically recite certain scenes word for word.  You think I'm joking, but I'm not.
We rushed to get to the theater on time and arrived five minutes before the start.  Once we got seated, E was in awe.  He was like a teenager going to his first concert: nervous, excited, not sure what to expect, and on some toddler level, he was trying to maintain an essence of cool.  His eyes didn’t leave the stage for the entire show.  All three of us enjoyed every bit of it, and to be quite honest, I don’t know who had more fun: the parents or the kids.  I mean, the parents knew every single word to every single song.  And we were not the least bit ashamed of it.  The best part, however, was when Biz Markie (who has a regular feature on the show called “Biz’s Beat of the Day”) came on stage and started singing “Oh baby youuuu, you got what I neeeeed."  Every parent in the theater was on their feet singing and clapping.  The kids enjoyed that part too, but of course they were a bit confused as to why mommy and daddy knew a song they didn’t.   Oh, old school 90s rap. Stay awesome.

﻿
﻿
After the show, we met up with another friend/former colleague and her family for lunch ,followed by a walk to Rock Center to gawk at the tree.  I love seeing the tree every year.  Ten years later and it still hasn’t lost its appeal with me.  Yes, it was really crowded and quite difficult to maneuver three strollers through the thick mass of people, but regardless, it was fun catching up and spending time with my friends one last time.  And we got a pretty cool family picture out of it too. 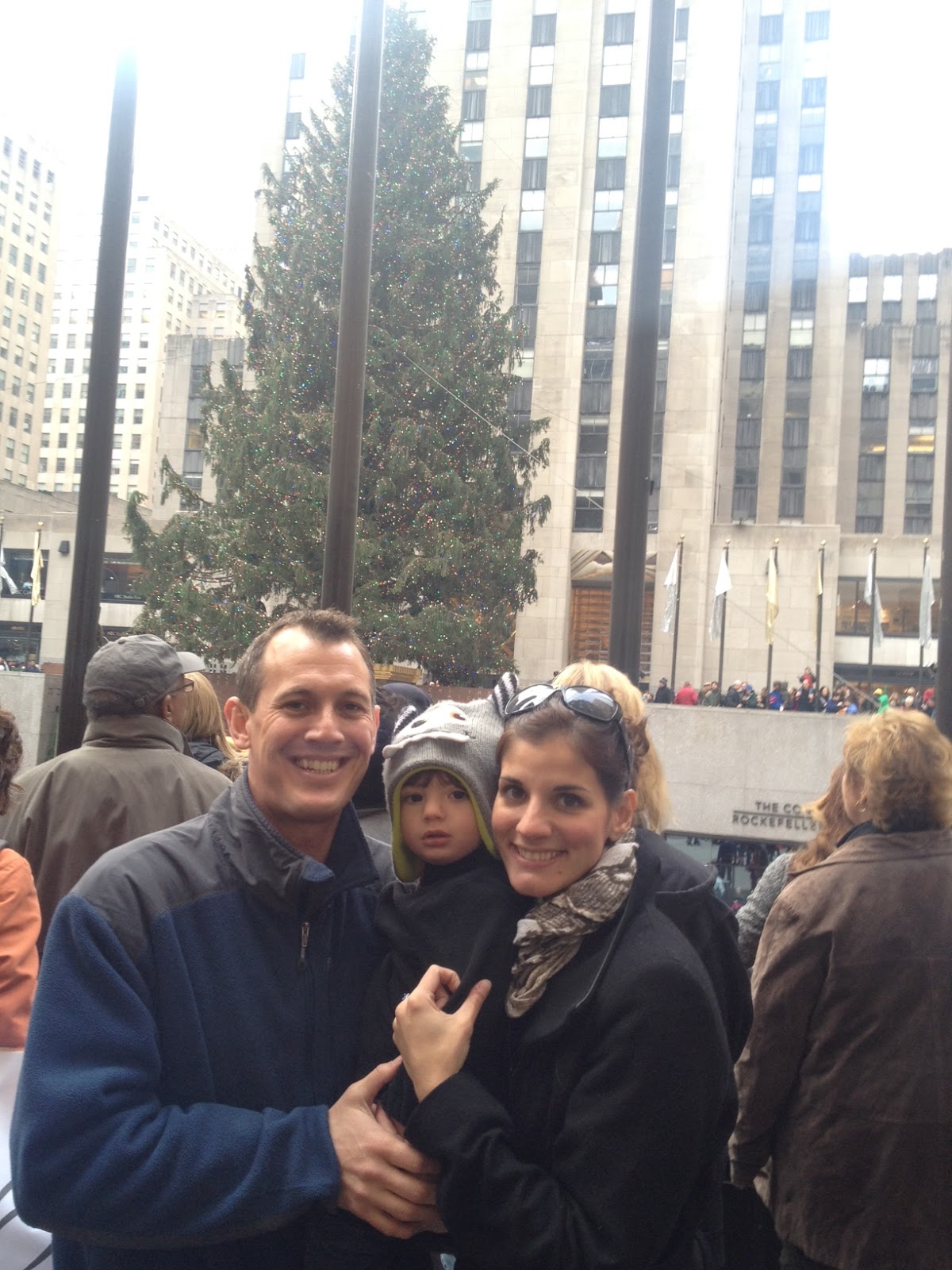 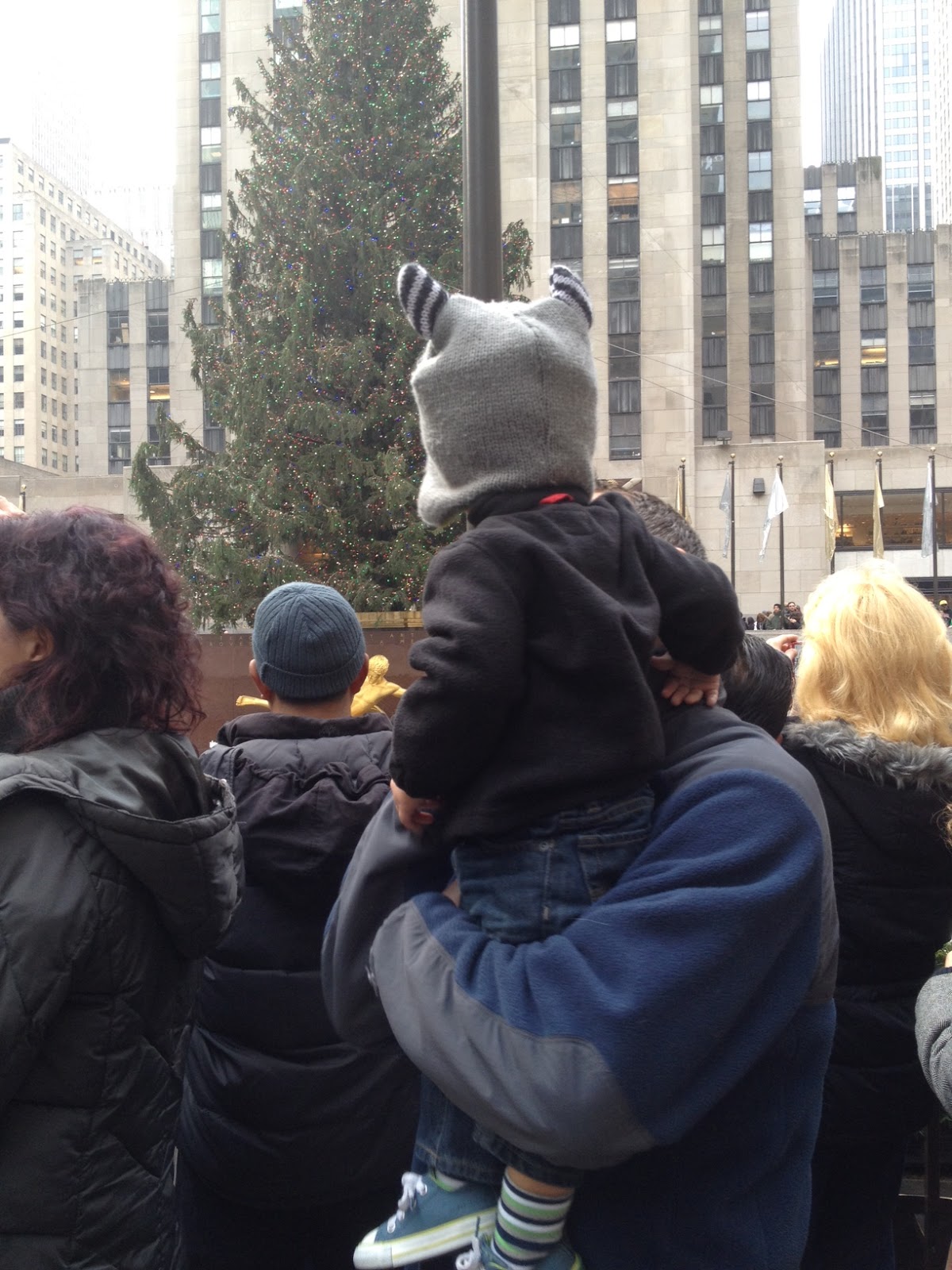 Last but not least, we headed back out to Brooklyn for one final visit with another couple and their son.  They had cooked dinner (delicious baked ziti with homemade meatballs.  Yum!), and invited us over to stuff our bellies before the long drive back to D.C.  We dined, talked, and watched the boys play together before finally deciding it was time to go.  We had to practically drag ourselves out of their apartment because we really didn’t want to leave.  Just one more day?  Please?  But alas, we had to say goodbye. 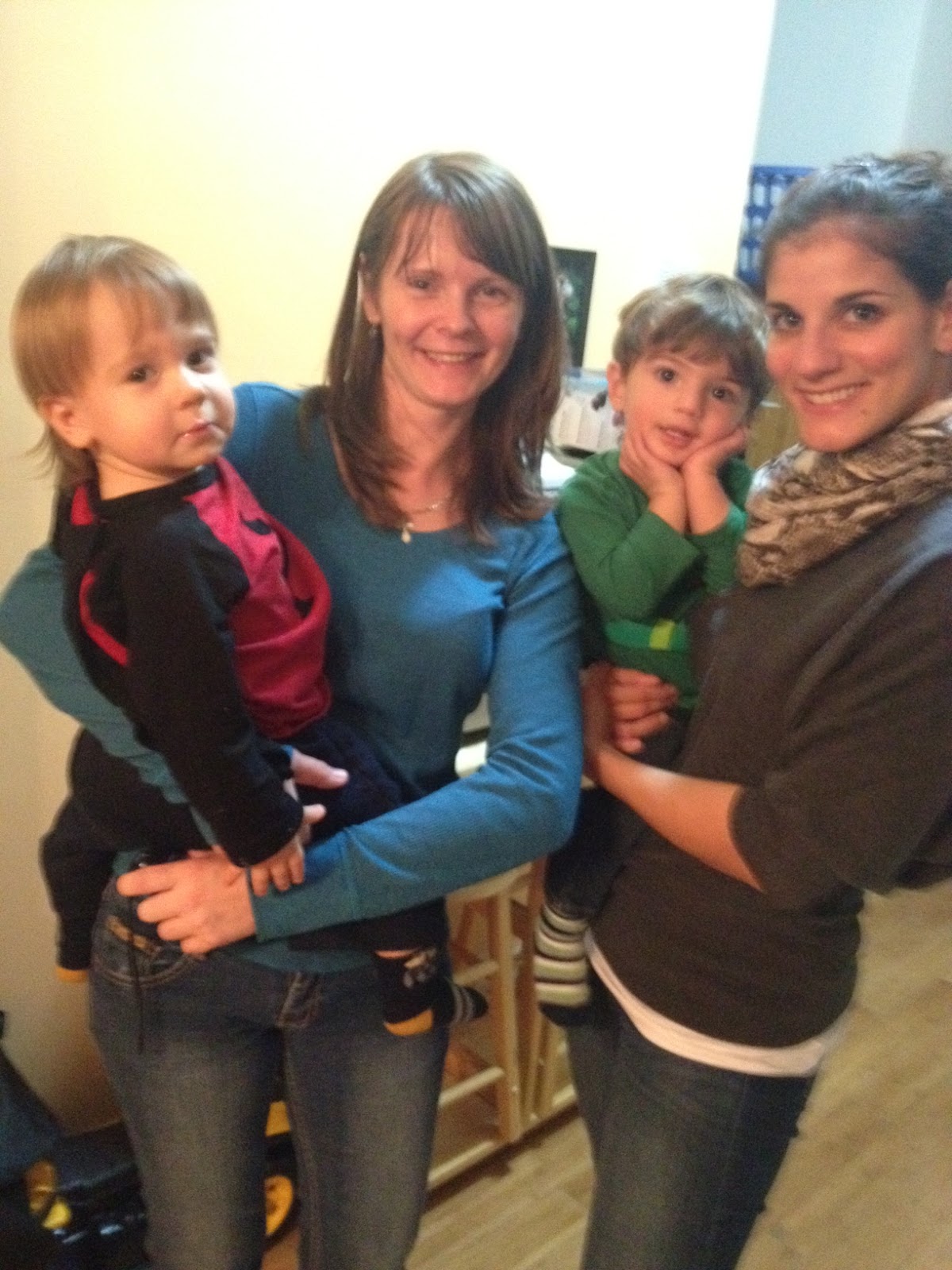 I’ve said it before and I will say it again. I miss New York.  It was home for 10 years.  That’s an entire decade of my life spent living in one of the most amazing cities in the world.  I will always miss it, but it warms my heart to know that no matter what, we will always come back.  We will always have our friends to see, our favorite restaurants to dine in, and our favorite places to visit.  New York was where I met S, where we bought our first home together, and where our son was born .  New York will always hold a little piece of our hearts.
Posted by L-S-E at 3:30 PM