Last weekend we took a trip to Turkey's Mediterranean coast to see a castle that is very popular in this part of the country.  The castle, Kiz Kalesi, is located in the Province of Mersin about 30km from the city of Mersin, and about 70km from Adana.  Mersin is a large port town where our HHE and car traveled through before arriving in Adana.  Because we were a bit pressed for time, we did not actually stop in Mersin, but instead drove through to our final destination at Kiz Kalesi.
Kiz Kalesi, literally translated to Girl Castle, is also known here as the "Floating Castle" because it is located 200 meters off shore and completely surrounded by water.  Legend has it that the castle was built by an ancient king around 72 A.D. for his daughter.  Apparently, a fortune teller predicted that the king's daughter would die from a snake bite at a young age, and in an effort to prevent this, the king built a castle for his daughter in the middle of the water.  Surely, the king believed, no snakes can get to her there.  But one day, a snake snuck into a fruit basket that was delivered to the king's daughter and it bit her.  She died and the fortune teller's predictions came true.
What remains of the castle is surprisingly well-preserved.  Because of it's location in the middle of the water, it has remained virtually untouched by pillagers and the like.  Today, you can rent a paddle boat or ask a local fisherman to take you to the castle.  We did not do this because the paddle boats did not have life jackets, and well, I just don't trust my 2-year old not to attempt a nose dive into the water.  Of course, the disappointment of not having a life jacket prompted me to order him one from Amazon.com last week, so we will be going back.
There is a second, less-preserved castle on the shore facing Kiz Kalesi.  According to the guide books,  residents of the shore castle extended a chain to Kiz Kalesi  that was yanked up to deter pirates from entering the harbor.  I don't know how effective that chain actually was, but moats were also built for a little more added protection.  You can explore the ruins of the shore castle for the cost of 5TL.  Not a bad price and the views are spectacular.
After exploring and strolling the beach, we stopped at a beach side restaurant and spoiled ourselves with kebabs, salads, tea and ice cream.  The ice cream was a treat for E for being such a good boy all day.  I think he's beginning to like it here. 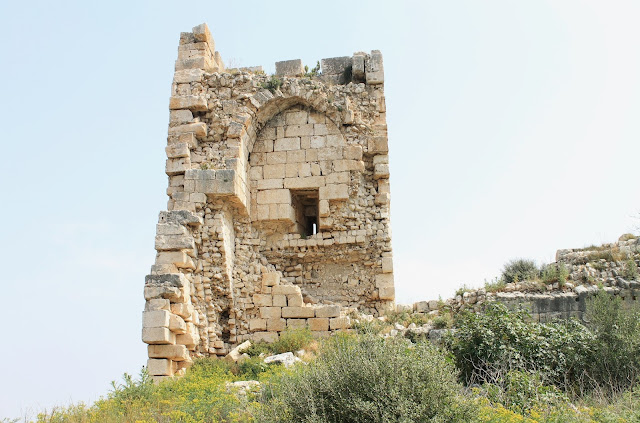