The other big road trip we took while my relatives were visiting last week, was to Cappadocia, about 3 hours north of Adana.  I will admit, I wasn't familiar with Cappadocia before we moved here.  I had read a bit about it, but I didn't know enough to realize it was a must-see.  After our arrival last January, pretty much everyone we met said, "You have  to go to Cappadocia while you're here!" So, we waited until we could share it with our relatives, and promptly booked our trip. 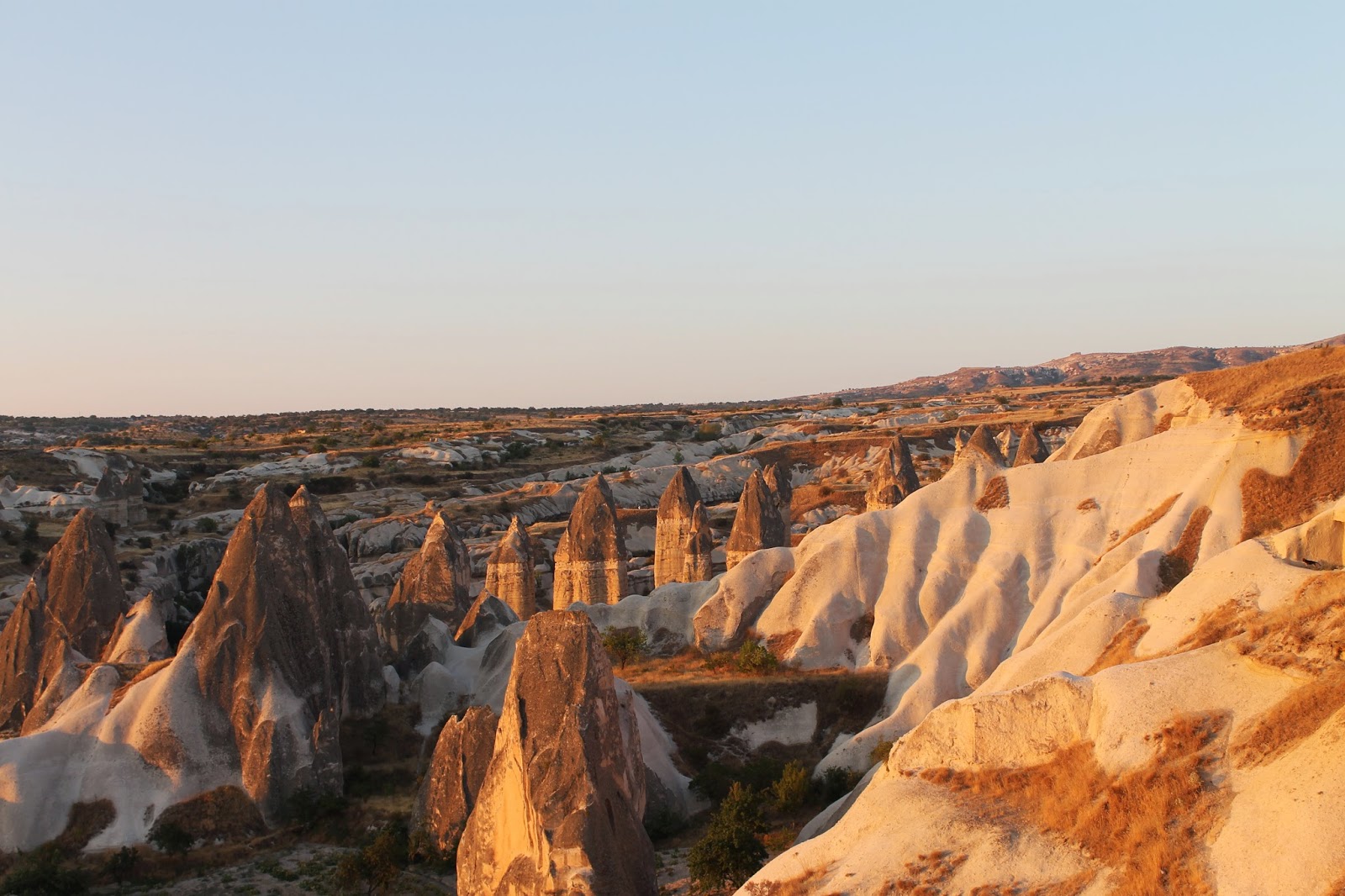 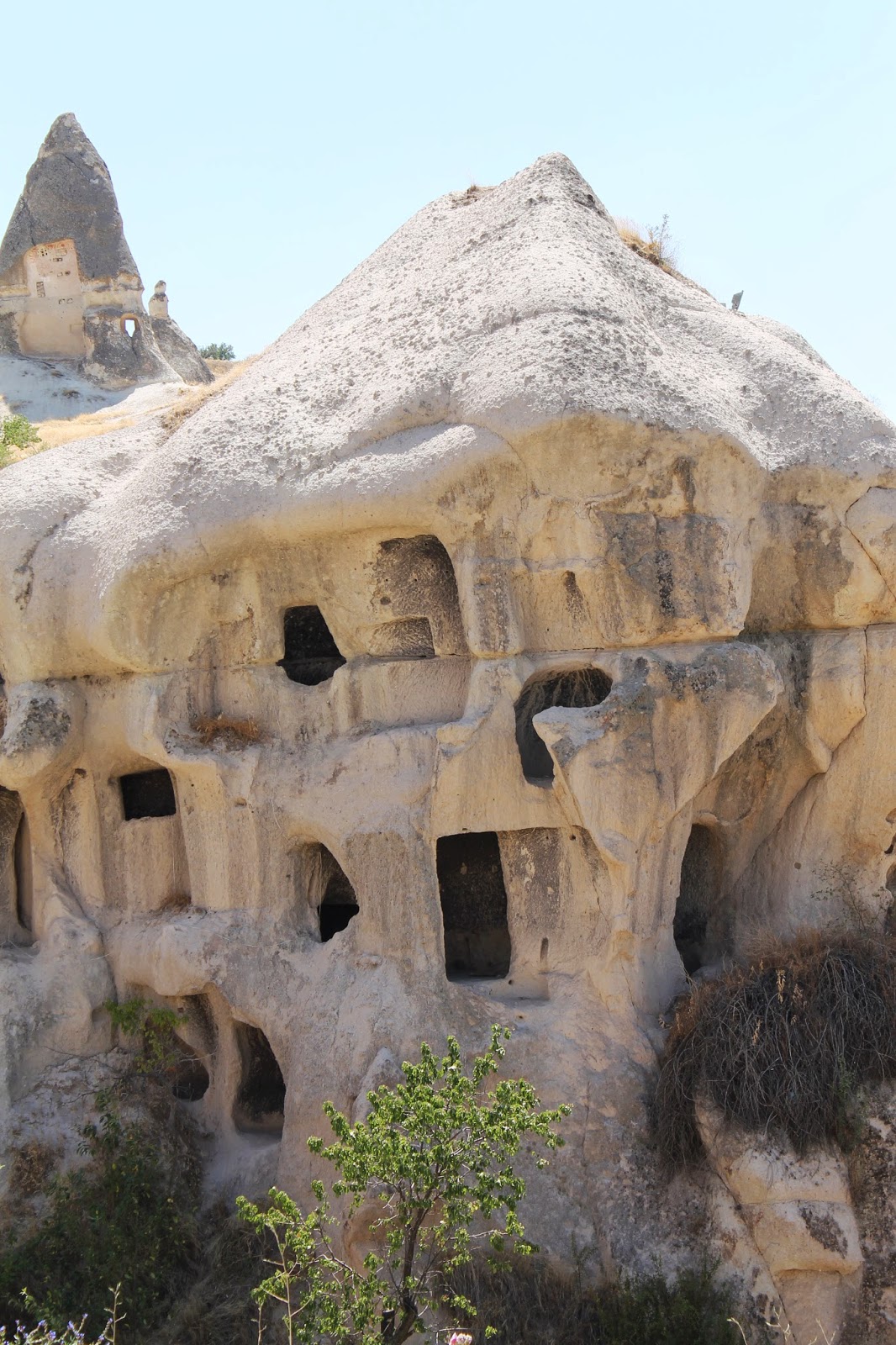 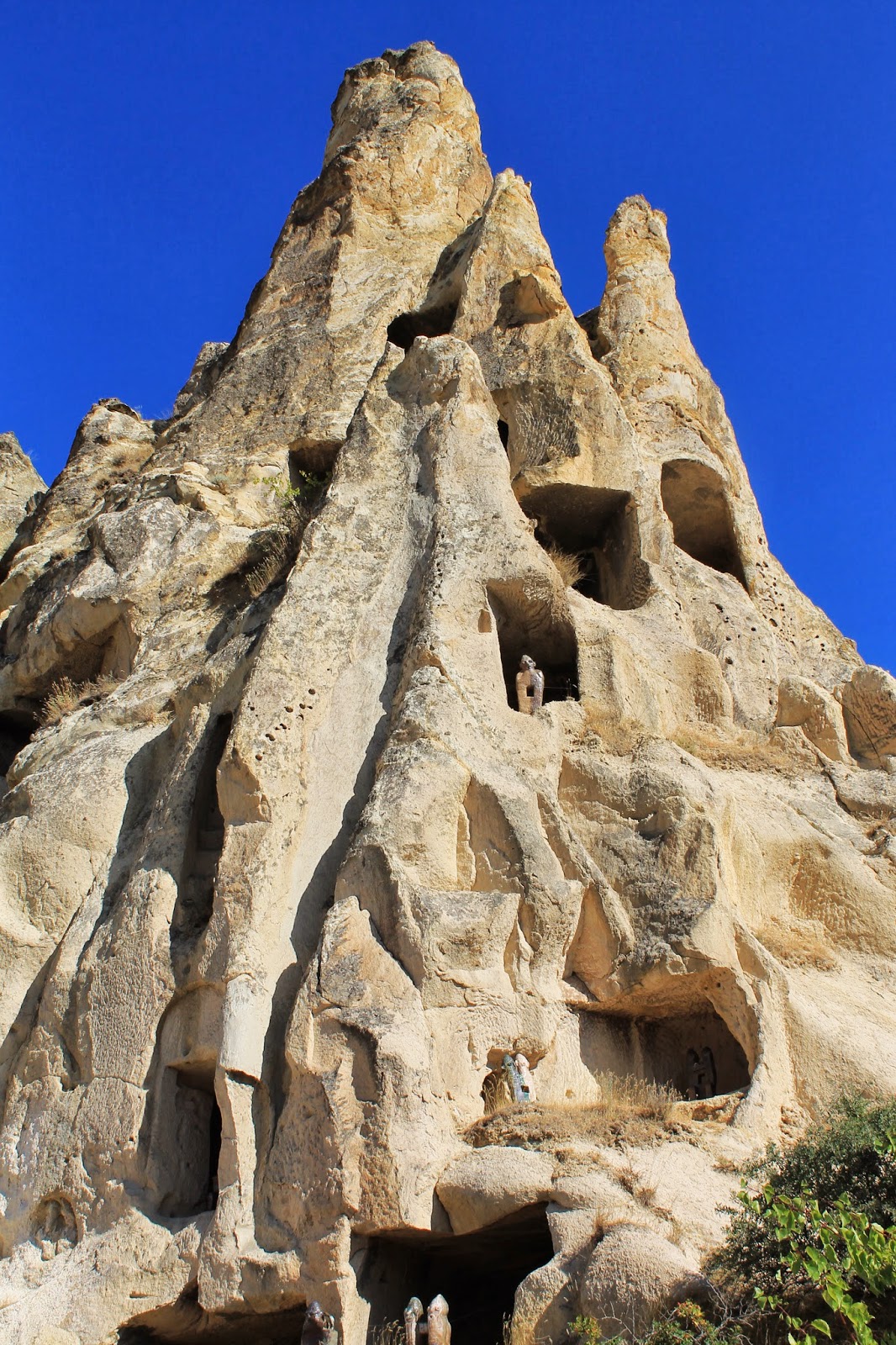 If you're curious to learn more about Cappadocia, you can read about it here.  Otherwise, I will try to keep the blog explanation simple.

Cappadocia is a UNESCO World Heritage site located in central Turkey in a region called Anatolia. Cappadocia stretches across three major towns, including the most popular town where we stayed, Göreme. Thousands of years ago, thick ash from a volcanic eruption covered the entire area, and erosion helped shape the landscape, creating "fairy chimney" like structures across the plain.  Years later, people thought these amazing rock structures would make for good homes and churches, so they began carving habitable spaces into the stone.  Just to give you a sense of age, the earliest known inhabitants settled in Göreme during the Hittite reign circa 1800 to 1200 BC. What resulted was a honeycomb-like underground city where people lived, worked and prayed.

Today, people still live in some of these chimney structures, and many hotels are built into them, including our hotel.  The original portion of the hotel was carved into the rock, while a new portion attached to the cave rooms, allowed for more modern amenities like a restaurant, pool and spa.  The town is rather touristy and most prices are all listed in Euros, not Turkish Lira, but we really enjoyed our stay.  They even set up the cutest little bed for E ahead of time, and he had absolutely no trouble falling asleep.

The city of Göreme maintains a fabulous open air museum where you can tour the caves and peek inside the churches and homes.  We toured the museum on the day of our arrival, and we were pretty impressed.  E, our sweet little boy with the ever-increasing imagination, thought it was the best thing ever, and proceeded to "scare away the monsters" and "get rid of the ghosts."  Don't ask me where he gets that, but it makes him happy.


At dawn the next morning, our guests went off for a hot air balloon ride across the valley (which they said was amazing), while I went to a lookout point to take some photos.  The view of the sun rising over the mountains and fairy chimneys while balloons floated in the air was probably one of the top 5 most beautiful things I have ever seen in my life.  Truly breath taking.  A few other visitors had gathered at the lookout point as well, but it wasn't overrun with tourists like I had feared.  I had space to myself to just sit and be.  It was the most quiet and still I have ever been.  A moment to yourself to look at something so spectacular doesn't come along often, so when it does, you have to soak it all in.  And soak it in, I did. 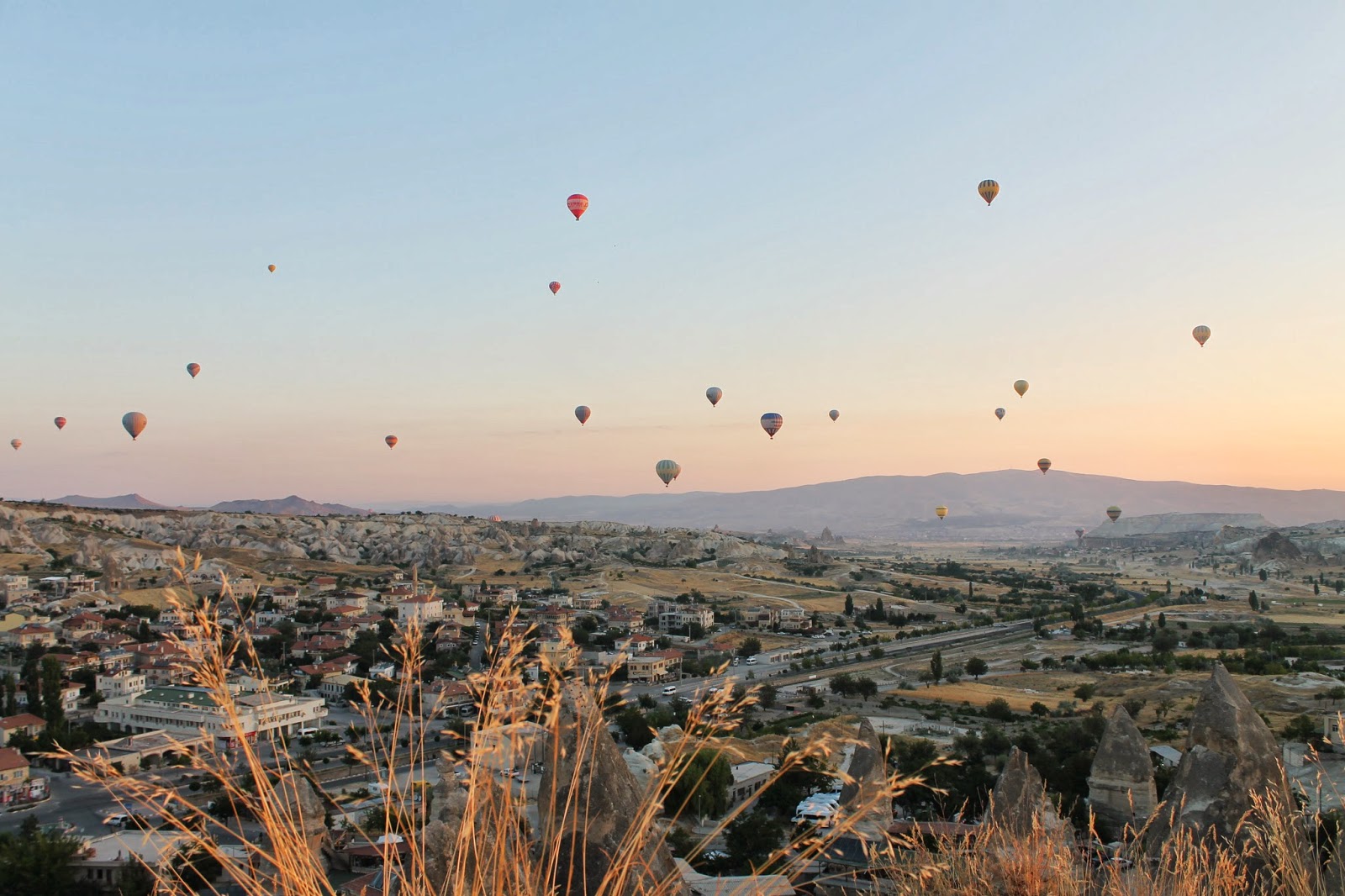 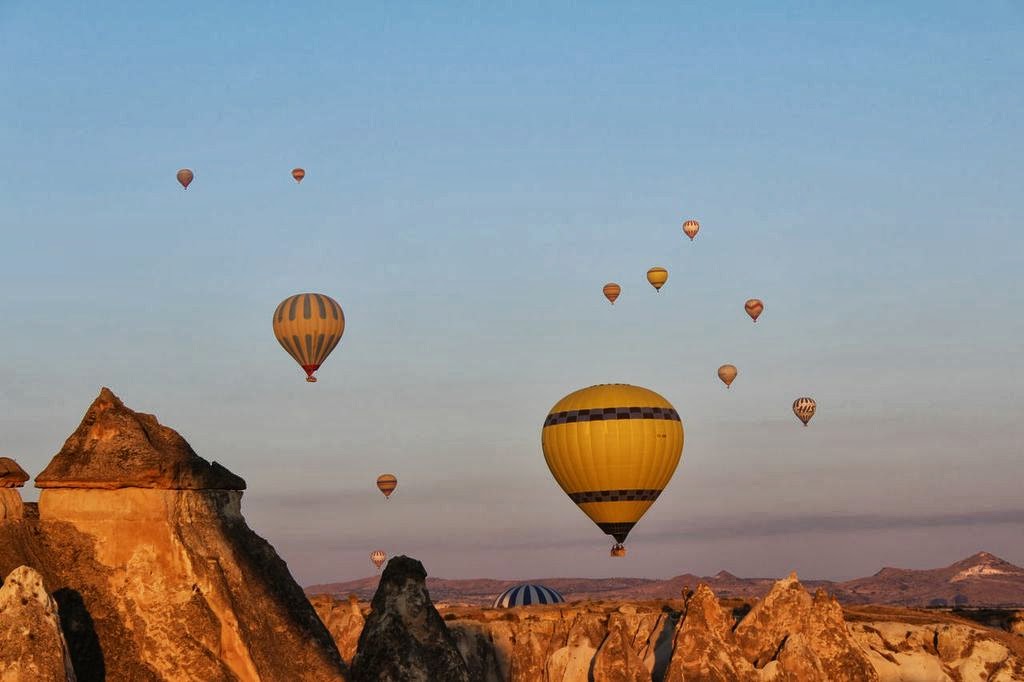 Upon check-out on the second day, we drove to another small town about 30 minutes south of Göreme  to tour an underground city that was used to hide Christians in the 10th and 11th centuries.  I was all excited about it until I actually walked 10 feet inside and realized what I had gotten myself into.  My claustrophobia got the best of me, and one of the tour guides said she would not recommend that I go any further if I was already nervous.  So, I took her advice and made a quick exit.  I wanted to take E out with me, but he'd already set his sights on some monsters that needed to be eradicated and thus refused to leave.  When S came out with him roughly 20 minutes later, he admitted that even he got a little freaked out too. The caves went about 8 stories deep and got more and more narrow as you descended.  S also said that he had to stoop down and practically crawl through some of the tunnels, but they were the perfect height for E, who thought it was even better than the open air museum from the day before.  And just in case you're curious, he did get rid of all the monsters.

After our  their tour of the underground city, we did some souvenir shopping, attempted to make a rug purchase, decided that was a stupid idea (prices were outrageously more expensive than here in Adana because it's such a touristy area) and got in our car for the 3 hour drive home.  I have a feeling that we will be taking more visitors back over the next year and a half, but I am looking forward to it.  It seems like there are new and fun things to discover each time.  And could you ever seriously tire of this view? 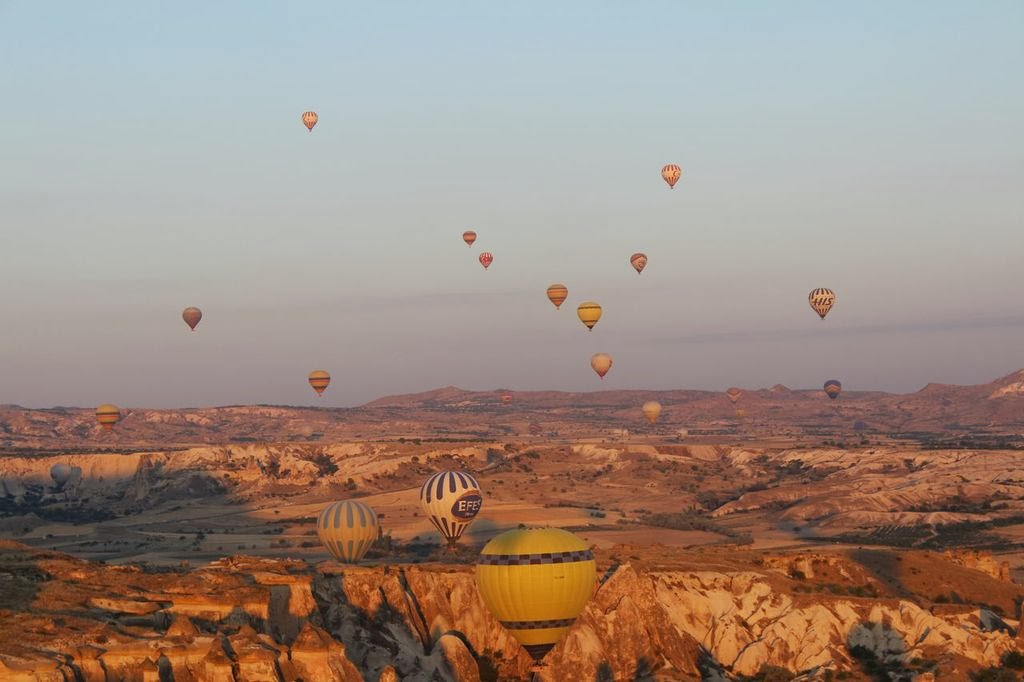