It just dawned on me that with all the baby news and holiday cheer occupying our times these days, I never blogged about our trip to Athens for the Classic Marathon back in November.

S chose to run this particular marathon because we hold fond memories of Greece, we have friends there that we were eager to visit, and because he has always wanted to run the original course from Marathon to Athens.  S, bless his heart, trained like a beast all summer in preparation for this marathon.  He set his alarm for 5 a.m. every weekday morning, save for his day off which was Friday, and woke up to run whatever mileage was on his schedule for that day.  Then he would put in a good 10 hour workday before coming home and somehow finding the energy to run around the apartment playing Monsters Attack or Rocketships and Dinosaurs with E.

His weekends were spent running loop after loop in the large park near our house, coming up the apartment only for water stops or bathroom breaks that lasted mere minutes before going back out there.  Once his training called for "long runs," he would be out there for hours.  In the dog days of summer. In the sun with absolutely NO shade. In the 100+ degree heat. In the 100% humidity.  It was insanity.  But he did it.

On the trip over, S was over the moon to discover we were seated on the same row with an Ethiopian runner who happened to be on our flight out of Istanbul.  S wished him luck and told him that he would be right behind him, nipping at his heels at the end of the race. I think the joke went over the guy's head.  Of course, I love my husband, but professional Ethiopian running speed he does not have.

The day before the race was rather low-key.  We tried not to do too much walking so as to let S get as much rest as possible, but we spent a good bit of time exploring the Runner's Expo where we went to pick up his race packet and number.  While there, S discovered his birthday had been entered as 1992, which had us howling in laughter, so he spent some time trying to get that fixed.  Then the evening was spent doing the usual carb-loading on pasta and bread and salads. No, I wasn't preparing for a race, but being pregnant gave me an excuse to carb load too.  I mean, it was for the baby, right?  I need the energy too!

Then, right before bed time, S walked into the edge of the platform bed at our hotel and promptly BROKE HIS TOE.   I mean, he screamed, and folded into a clump on the bed. Out of pain or fear of not being able to race, I still don't know, but he just lay there while I tried not to freak out.  Then he got up, turned off the light and we went to bed.  Not one glimpse at the toe, not one sentence uttered about it.   That was that.  I think he just wanted to forget that it had even happened.

The next morning I could hear S getting ready to walk to the free shuttle.  I quietly asked how his toe was feeling and as he fumbled around in the dark, I heard him mumble an unconvincing "fine."  I knew to not pester him, and off he went, ready to run.

E and I spent the morning walking around souvenir shops, eating breakfast in an outdoor cafe, and sharing cups of hot chocolate together.  He was being so sweet and kept asking when we were going to go see Daddy "run that maratom."

When the time came, we ventured over to the finish line when I estimated that S would be nearing his finish and found a prime spot 250 meters from the end.  We stood and waited.  And waited.  I tried to hold our 30 pound toddler on my shoulders so he could see, while he begged to be put back in his stroller so he could nap.  I tried very hard to keep him awake to see his Daddy, but nearly 30 minutes had passed since I expected S to finish, and I just didn't have the energy to hold him any longer.  So off to nap he went while I stood there trying not to worry.  "Is he okay?"  "Why hasn't he run by yet?" "Wait, did he run by and I just missed him?" "No, that's not possible, we got here right one time."

Then the bigger fears started to creep in as our waiting ticked to near an hour.  "What if he collapsed?" "What if he really hurt his toe so bad that he can't walk?" "What if he's in the hospital and I don't have a phone that works and I have no way to contact him?!?"

And then, his red shirt flashed in the distance and I could see him running toward me, determination and exhaustion etched into his face.  I shouted his name, he ran over to give me a kiss, cast a disappointing look downward at E sleeping in the stroller as I apologized for not being able to keep him awake, him saying it was okay, pecking me once more on the cheek and taking off for the finish line.  He was okay.  Exhausted, but okay.


After the race S told me how impossible this marathon was.  For him, it was the worst one he has ever done. He just couldn't believe how hard it was. It was straight uphill for nearly 75% of the race, only dipping downhill a couple times, before entering another climb.  He said his legs seized up on more than one occasion, and the pain that he had in his toe was all but forgotten when his legs started to give out and his muscles started to spasm.  He said he never understood why people "walked during a marathon" when they should just push through it and keep running (umm, what?!?) but that now he understands. I had to laugh at that sentiment.  But despite being 50 minutes over his personal best time, he was still proud that he finished.  And so was I.  He was not prepared for hills.  He didn't train on hills.  And he realized that was his biggest mistake.  He was just so excited to run this particular race that he never bothered to check the elevation charts and reviews from other runners, and he was under prepared for the intensity of the course.  But he still finished.  Now he is looking for his next marathon.  I saw him Google "flat course marathons Europe" the other day and had to stifle a giggle.

As for the toe.  It was indeed broken.  And BLACK from bruising when he took off his sock after the race. I will spare you the photo that he took, just know that it was nasty and now almost completely healed.

All in all, it was a fun time for the family to be together.  And S now likes to rub it in that we are tied at 4 marathons each.  I used to have bragging rights for having run more than him, because after all, it was me who introduced him to the sport, but not anymore.  However, you better believe that once this baby pops out, I will be training for my next marathon.  Then I will be back on top with FIVE.  Mwuahahaha!  But he will always be faster than me, so there's that. 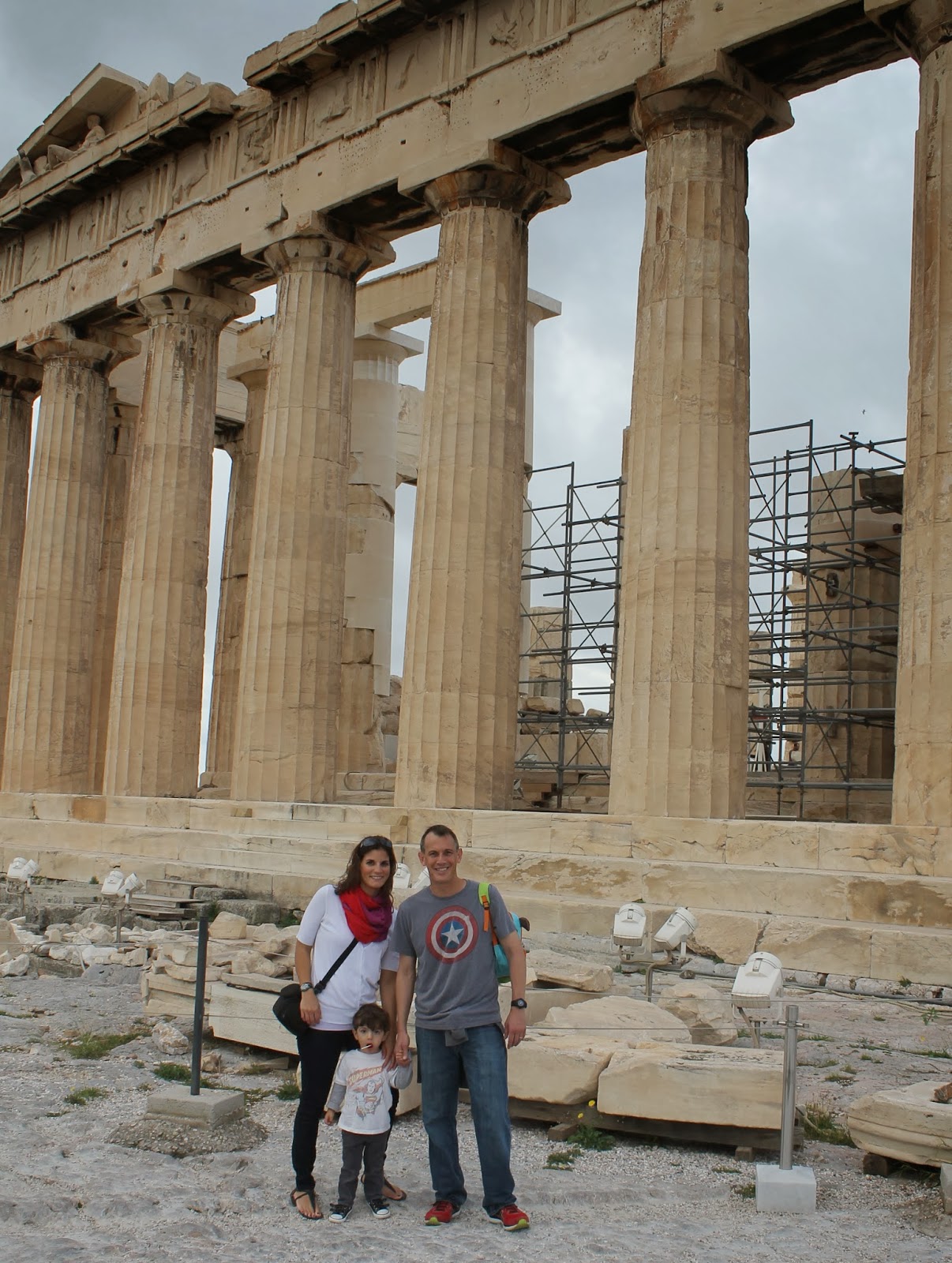