Christmas was pretty low key for us this year, but it was still a lot of fun.  This was the first year E was really aware that such a holiday existed, so he was excited about the whole Santa and presents thing.  What kid isn't?  He told us very early on that he wanted a "castle and a dragon and a princess so he can save the princess from the dragon," and S and I made damn sure Santa brought it for him.  I seriously don't think the kid has stopped playing with it since Christmas morning.  He couldn't be happier.  Not to mention he was totally spoiled by his grandparents and aunts this year.  We actually hid some toys and arts and crafts to open for later because it was just too much.

Gift opening was followed by lots of playing which was followed by a home cooked holiday dinner and then an early bedtime since we were all exhausted.  It was a quaint little celebration, and it was perfect.

And now for the obligatory photos... 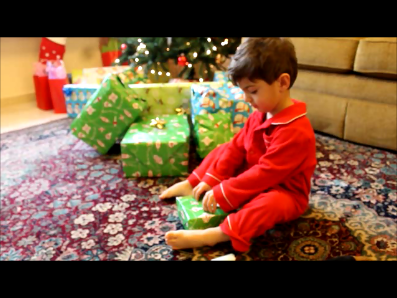 **All the photos were pulled from video and they are all out of focus for some reason.  I apologize for assaulting your eyes with such blurriness.**
Posted by L-S-E at 12:08 PM