A couple weekends ago we hopped a 45 minute flight to Colombia's Caribbean coast and enjoyed a three night stay in Cartagena.  The embassy was closed for a Colombian holiday weekend, so we tacked on an extra day and made our first beach trip out of town.  S and I had both been excited about visiting Cartagena since we learned we would be moving to Bogota, and it did not disappoint.

We stayed at a lovely resort hotel with its own private beach, five swimming pools, a water slide and a playground.  We sat in the shade and sipped cocktails (well, mocktails for me) and watched E splash around in the pool while we took turns floating around with D.  We took the boys to play in the sand and splash in the waves, again, mocktails not too far out of reach.  We ate burgers and fries pool side and indulged in ice cream for dessert.  We ordered room service on occasion because honestly, it was easier and cheaper than schlepping two sun-exhausted kids back down to a restaurant where we would be forced to quell their squirming and screaming as we waited for dinner to arrive.  We lounged and read and talked, and D even napped in our arms by the pool every afternoon, completely wiped out from the day's events. And when the sun started to set, we went up to our room, showered and lounged around with the windows open and a fresh Caribbean breeze blowing in.

It all sounds so relaxing and fun, right?  Because it was.  S and I have learned during our travels since having kids, that in order for it to actually feel like a vacation, you have to stay at an all-inclusive (or nearly all-inclusive) resort with just about every amenity at your finger tips.  Gone are the days where we strap on our backpacks and find the cheapest hostel or hotel room in town.  Gone are the days where we eat from the street vendors because that's all we can afford, or cook our own beans and rice on the bungalow provided hot plate like we did in Costa Rica. And gone are the days when we just head out on a whim to explore and discover whatever there is to discover.  We've been there, done that. Now we have kids. I know it sounds cliche, but kids change the vacation dynamic quite a bit. But you know what, I ain't complaining.  I had my adventure.  I paid my dues in smelly hostels where I slept with one eye open because the door locks didn't work properly, or took the 5-hour bus ride instead of the 1-hour boat ride because it was $4 as opposed to $10.  Nowadays, adventure is hoping your 1-year old doesn't blow out his Little Swimmers in the pool or your 4-year old doesn't get too much water up his nose.  Where you can just sit by the pool and relax as much as possible until one of those two things (or God forbid, something worse) happens.

But lest you think we just vegged and didn't do any exploring, I will tell you that we ventured into the walled city one day.  E loves pirates and pirate ships, so we hopped in a cab and took him out to explore.  Both boys were in love with the cannons and the ships docked in the harbor, as well as the ancient wall that wraps around the historic part of the city.  Since this is the Caribbean in June, it was blazing hot, but we tried not to let that get us down.  D reclined in his stroller while E walked around with us trying his very best not to complain.  We explored the cool buildings within the walls, sticking to the shady side of the street.  We, at E's request, of course, ducked into an old Church so he could look around (he has been obsessed with churches and Jesus since our trip to Cologne last December), and we even went on a tour of a museum that we thought was about the history of the city, but turned out to be about the history of witches in the city, and the various torture devices used to a.) determine if they were witches and b.) kill them if they turned out to be.  It was a bit much, but thankfully there were no nightmares later that night.  Only about a bazillion questions from a certain curious 4-year old.  After our exploration of the city, we ducked into a restaurant for lunch.  We found the most air conditioned one around--the Hard Rock Cafe.  It was hot, the kids were cranky, don't judge us.  But just so you know, the food was awful.

After that, it was all pool, sand and surf.  I've said it before and I will say it again, our family is a beach family.  We are all truly in our element when the sun is shining and the water is inviting and cool.  We are looking forward to our next upcoming beach trip, so stay tuned! 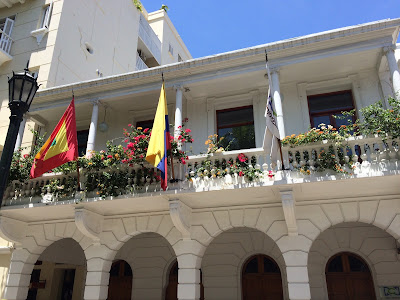