Our HHE arrived last Friday, and boy oh boy, Christmas in March doesn't even begin to describe the excitement.  Our household effects took longer than expected because of a freakishly freak incident that happened with our diplomatic passports (an incident I obviously can't blog about) so when we got word that our stuff was finally on it's way, my heart did a little happy dance. 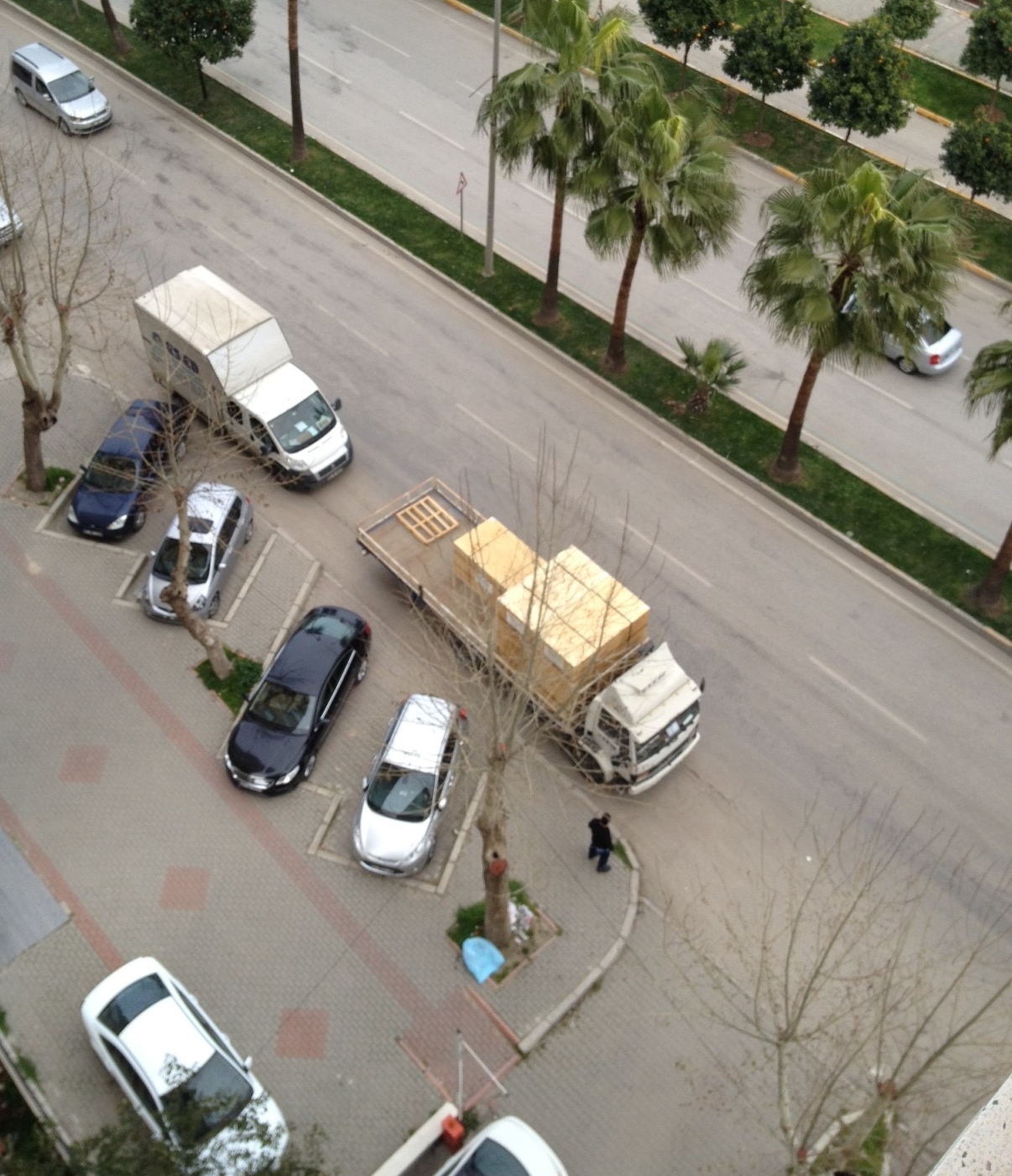 Waiting for the truck to be unloaded.
Sure, sure, I know our HHE are only things, but it's those things that make a house our home.  And well, this place just hasn't felt like a home since we got here.  For starters, this apartment is three times bigger than any place S and I have ever lived in, so the open space combined with the empty bookshelves and barren white walls made it feel all the more empty and lonely.  Don't get me wrong, I love this place.  It's amazing and I am so grateful to live here.  But I am so, so happy to finally have all our stuff so I can put the finishing touches on it to make it OURS...for the next two years, at least.
The unpacking and organizing is about 90% complete, with just a few minor things that still need to be done.  One of the most important is getting our art work hung throughout the apartment.  Someone from the consulate will be coming to take care of it next week, so I need to figure out where I want to hang everything before they get here.  Apparently we aren't allowed to do it ourselves (I did not know this!) but since the walls are thick concrete and we don't have tools to deal with concrete anyway, we wait. Patiently...


But, new bedding has been purchased for the guest rooms, new dishes are put away and E finally has his old crib back, which will soon be transformed into a toddler bed.  Oh, and his toys.  I can't forget about the toys.  For some reason I don't remember him having so many when we moved, but there they all are, begging to be played with. So far he is loving it and has actually been doing a lot of playing.   Curious George and Caillou are on the back burner for now.
And S and I have our books!  Want to know what happens when two book lovers fall in love, get married and move in together?  Their books move in too.  S and I have been purging our book collection since we met 6 years ago.  At first it was because we were trying to cram everything into a tiny, one bedroom apartment.  Then after we moved into our two bedroom place a few years later, our "library" needed to become E's nursery, so we purged again.  Then we found out we were moving and disposed of even more books.  And yet we still have so many.  Just how many books did we ship all the way from New York you ask?  Twenty-two boxes full, that's how many.  Yes, I counted.  When your movers keep saying "çok kitap" (lots of books) as they haul yet another heavy box through the door, you tend to get a little self-conscious.  But opening those boxes and seeing the books we haven't seen since July was heavenly. Just like Christmas.


Of course we did make a few funny discoveries during the course of our unpacking.  We can now say we shipped an empty coffee can, a baby wipes canister with exactly one, dried up baby wipe inside, and not one but two take-out menus from our favorite Thai and Indian restaurants in Brooklyn.  I can see all that coming in handy while we're here, don't you?

I will be posting some before and after shots of our apartment once everything is 100%, so stay tuned.  Or not, up to you.  I just know that I love being a voyeur when it comes to this sort of thing, so I figured I would return the favor to all you other voyeurs out there.  And because Mom, I know you're dying to see how clean we're keeping the place.  Don't worry, the mess in the above picture was picked up in no time.
Posted by L-S-E at 1:08 PM