But now that the work is done, I can finally blog about our awesome trip to Istanbul last weekend!

We flew out last Friday morning, turning our three-day Memorial weekend into four.  The flight was very quick, taking about an hour.  E was amazing on the flight there and back, and I will go so far as to say he was amazing for the entire trip.  He didn't have a single meltdown and he was a trooper as we dragged him from one historic site to the next.  He sat in his stroller, walked holding hands when he got tired of sitting,  used his words instead of whining and enjoyed ice cream cones at the end of every day as a reward for being such a good boy.  In fact, the kid had so much ice cream (Hey! We were on vacation!) that when I asked him if he enjoyed Istanbul, he said, "Oh yes mommy, E liked to eat all the ice cream."  Glad you enjoyed it kid, cuz it will be a while before you get special treatment like that again.

Our first day was enjoyable.  We arrived in the afternoon and since we were staying in an (awesome!) apartment near Galata Tower, we made that our first stop.  The area around the tower was very nice, surrounded by cafe's, restaurants and boutique stores.  We bought tickets to go to the top, which provides the best panoramic views of the city. But if you're claustrophobic, I don't recommend it.  I am happy to say I did it so I can check it off my bucket list, but I will never do it again.  The platform at the top is extremely old and so absurdly narrow that two people could not stand side-by-side.  We had to shift our bodies to pass by each other, as many people were stopping to take pictures and blocking others behind them.  It was beautiful, I will attest to that, but I was ready to come down after about 5 minutes.

You can see the panoramic views in the photo collage below, as well as photos from our walk across the Galata Bridge the next day.  E loved the bridge because of all the fisherman and their fresh catches.  E enjoyed hollering out, "Look! Another fish!" every time someone reeled something in, even if it was only the bait. 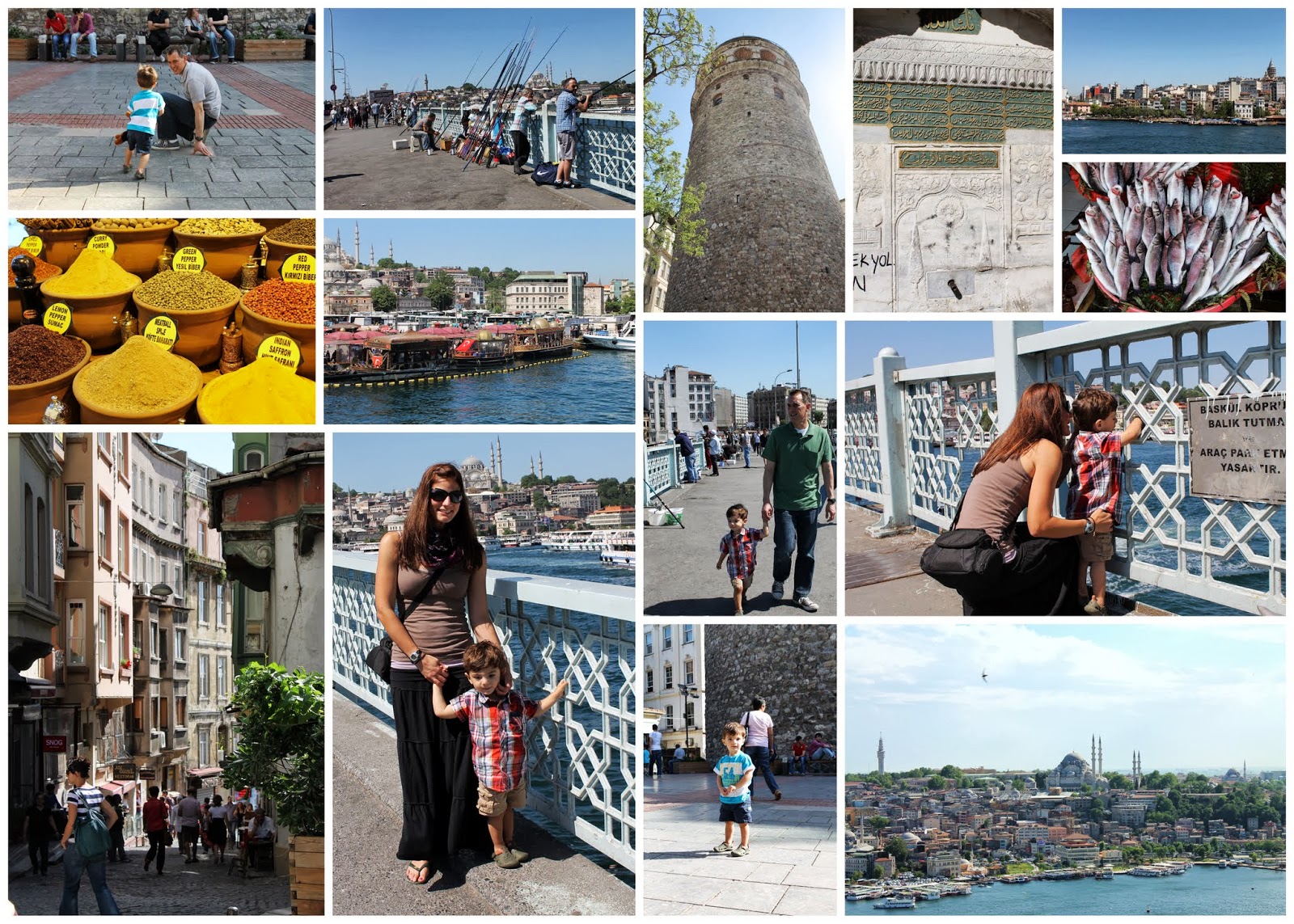 After Saturday's walk across the bridge, we enjoyed a leisurely stroll through the Spice Market and up to the Sultanahmet to view the old city.  Our first stop was Topkapi Palace, which we only viewed from the outside because the line for tickets was too long.  It didn't bother us because it was a good spot to people watch and let E run around for a bit.

Later we strolled to the Aya Sofya (Hagia Sofia) where we purchased tickets to go inside.  And oh my goodness, how beautiful it was.  The colors on the ceiling, the dome appearing to suspend in mid-air, the details in the architecture--it was simply exquisite.  Even E tilted his head back and whispered, "Wow. Beautiful."  Beautiful is his new favorite word, by the way.

After touring the Aya Sofya, we made our way to the Blue Mosque where we stopped to rest and take photos near the fountain outside the perimeter, and then made our way inside the courtyard.  Again, we did not go into the mosque as it was the middle of prayer time, but our goal is to go back on our next trip.  The open courtyard itself was beautiful, especially the tile work on the domed ceilings.

Finally, we made our way to the Grand Bazaar which was originally only intended as a pit stop (because we can buy any of that stuff here in Adana at any time) but because E actually fell asleep in his stroller, we walked around for two hours while he slept.  Why, you ask?  Because the ground inside the Grand Bazaar was smooth and did not consist of broken cobblestone that we had been battling since our arrival.  You see, we made a last second decision to bring our light-weight travel stroller instead of our BOB jogger, and well, the small stroller was a bust.  I think we cursed that stroller at least a few dozen times as the wheels consistently got stuck.  And the stairs!  Good thing S is training for a marathon.  He "trained" by doing the heavy lifting up and down.  But I digress.  We let the kid sleep and then made our way back to the Galata Tower where we had a fabulous dinner on the roof of the Konak Cafe.  I had an excellent kofte (meatball) with yogurt casserole dish, while S enjoyed a seafood pasta.  And the views could not be beat. 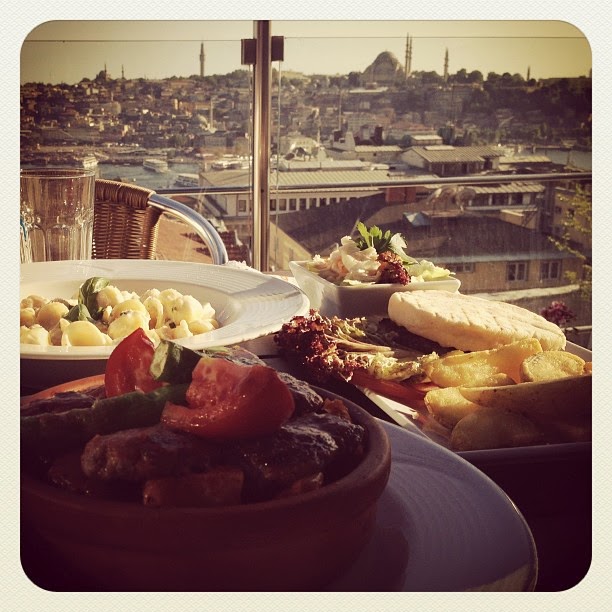 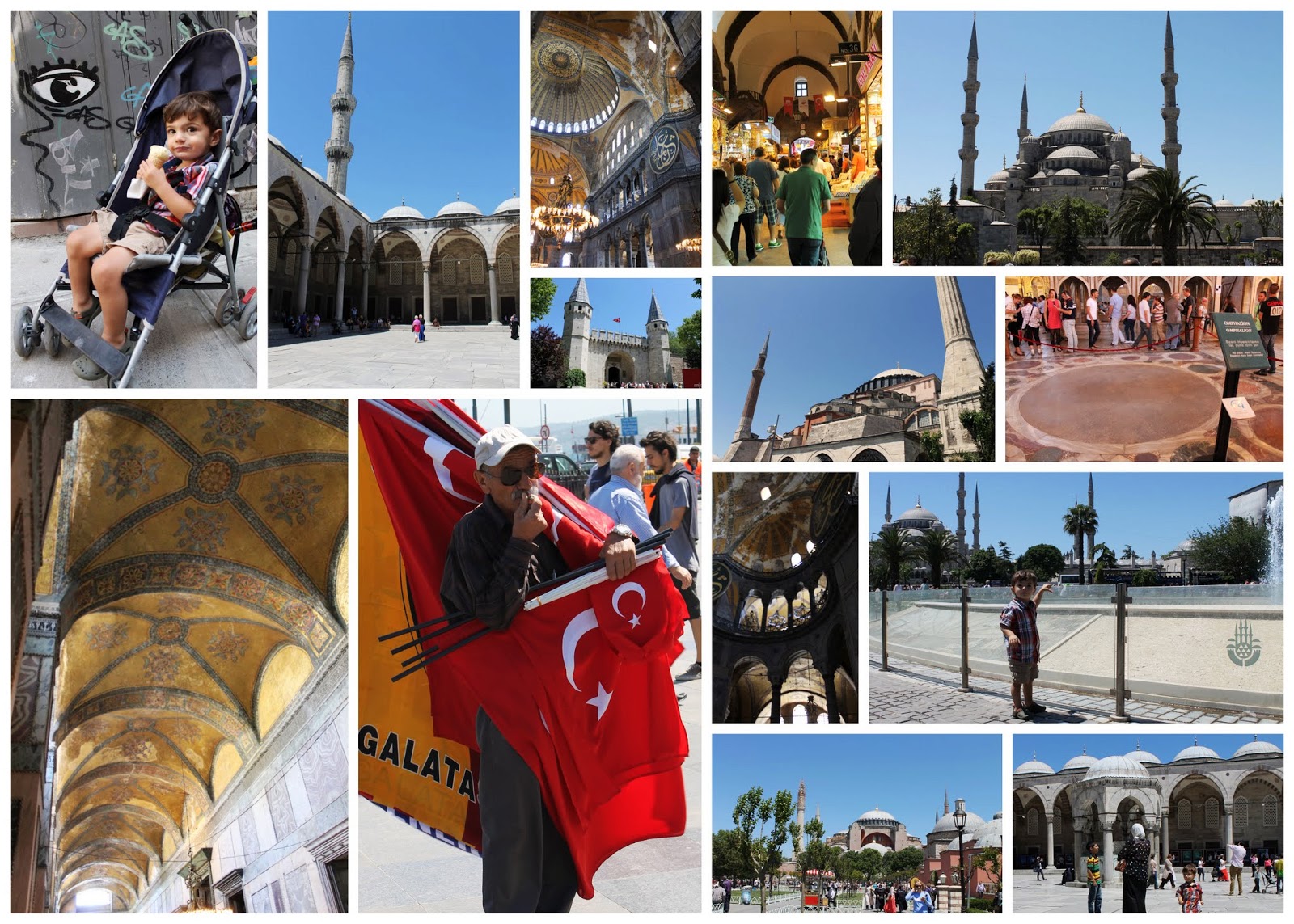 Sunday was a bit more relaxing as we took E to a playground and later met a couple of S's A-100 friends (who happened to be vacationing there that same weekend) for lunch in Sultanahmet.  Then we made our way to the port for a Bosphorus cruise so we could all relax, talk and take in the sites at the same time.  The cruise was beautiful.  The city is so large and you really get a feel for its enormity once you're out on the water looking back.  While cruising, we saw several party boats with guests celebrating Sunnet, also known as the celebration of circumcision.  In Turkish culture, little boys are circumcised between the ages of seven and 10, and families go all out, spending every penny they can to throw a good party.  The circumcision itself takes place weeks prior to the actual party (because could you imagine actually having to dress up and put on a happy face after that?) and come celebration time, they don elaborate garb reminiscent of a sergeant major, complete with a pointy hat and scepter.

We spotted this little guy posing for photos before the cruise.  He was one of many that day. 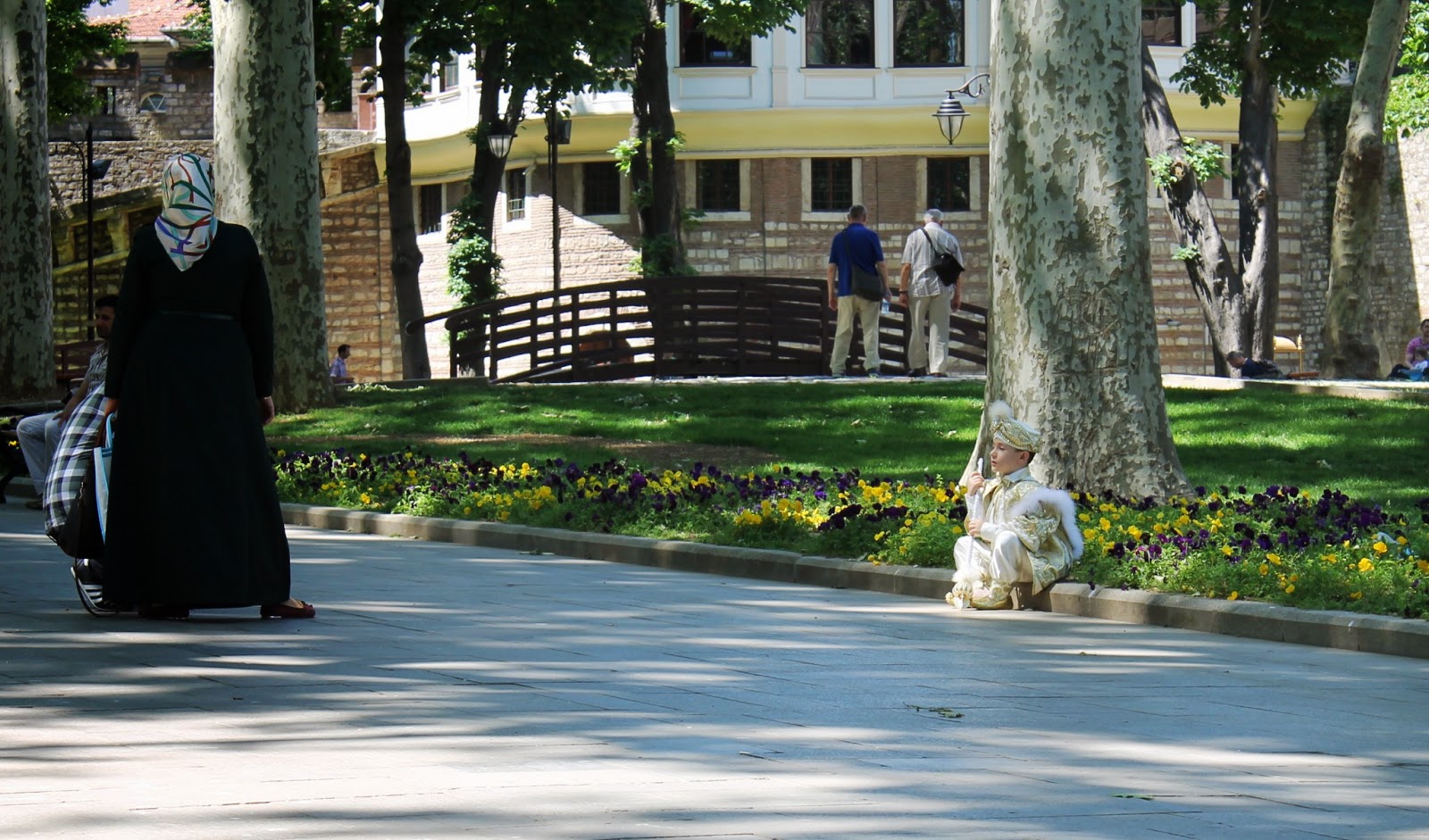 After the cruise, we spent time walking down Istiklal Street, stopping for dinner at a really amazing restaurant with yet again, spectacular views of the city.  We kept E out later than usual so we could finally see the city at night.  That's the trouble when traveling with a toddler, you're at home by 8 p.m. in order to put the little guy to bed.  But E was a trooper that last night and stayed out until 10:30.  He didn't even make a fuss, but that could have had something to do with the post-dinner ice cream we all shared. 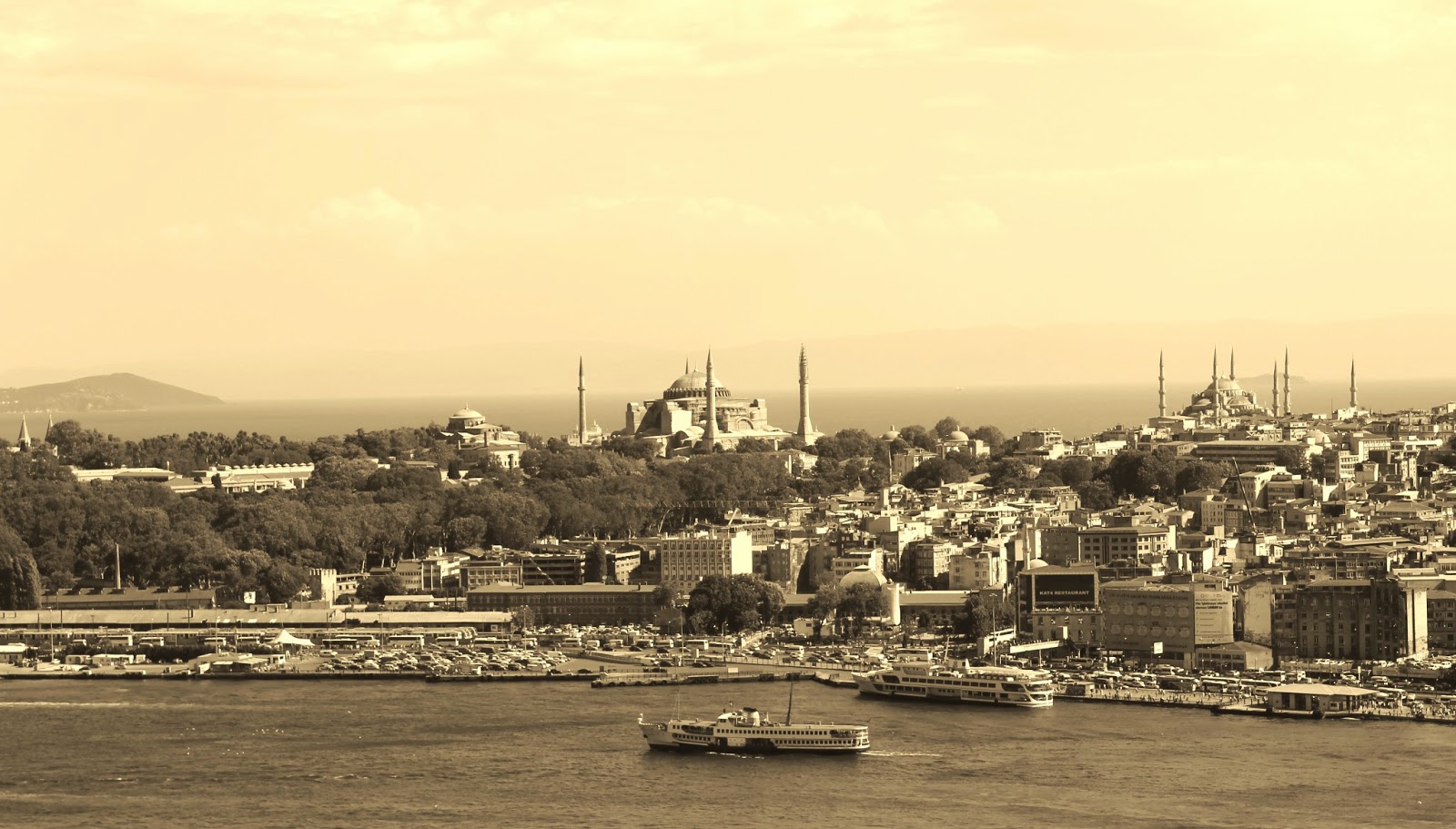 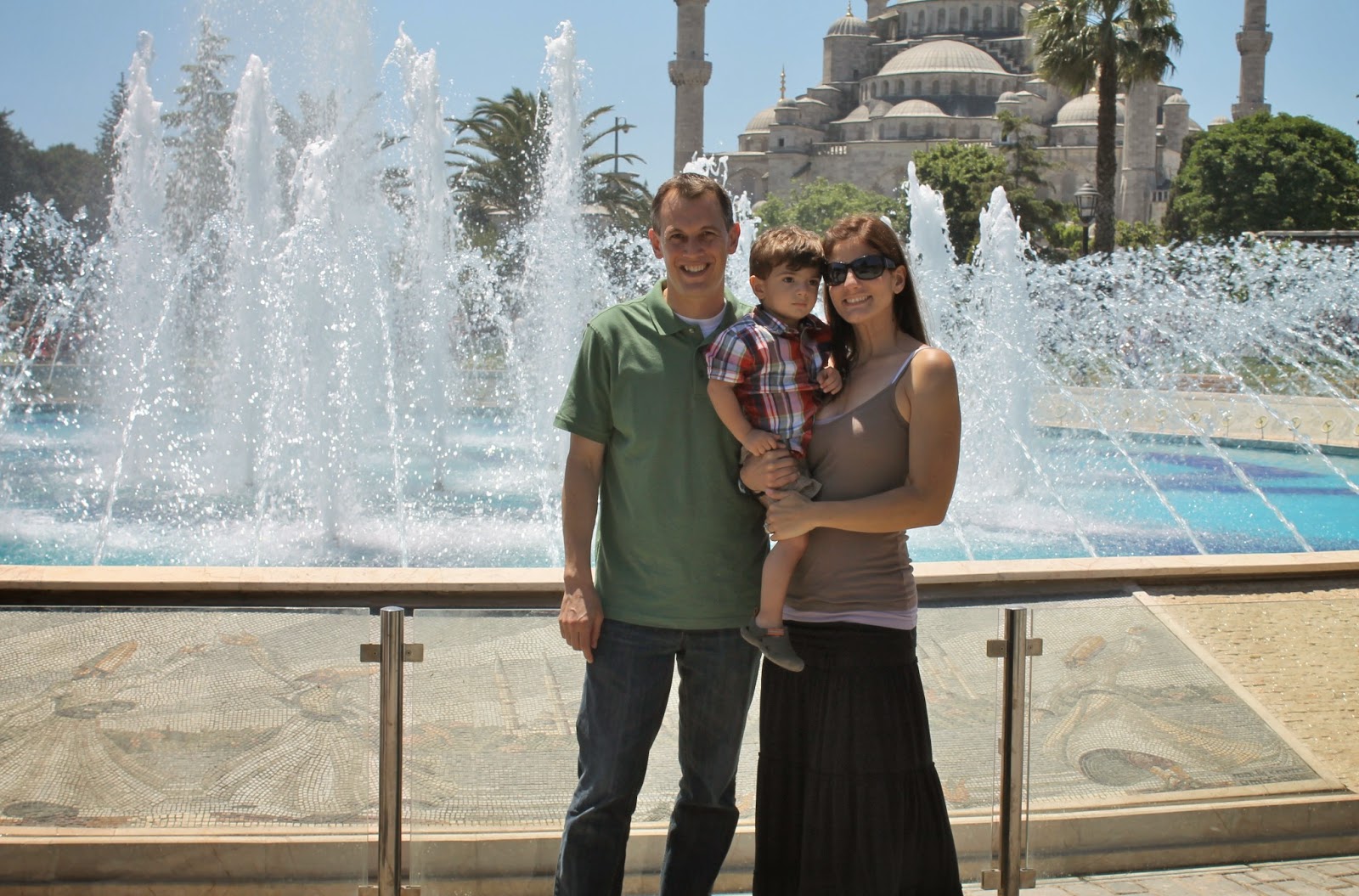 We flew out the next day and went straight home to settle in our own beds for a nice, long late-afternoon nap.  We loved Istanbul (although if you have kids, I don't recommend using a cheap stroller to get around!) and we hope to go back at least once more during our time here.  There's just so much more to see! 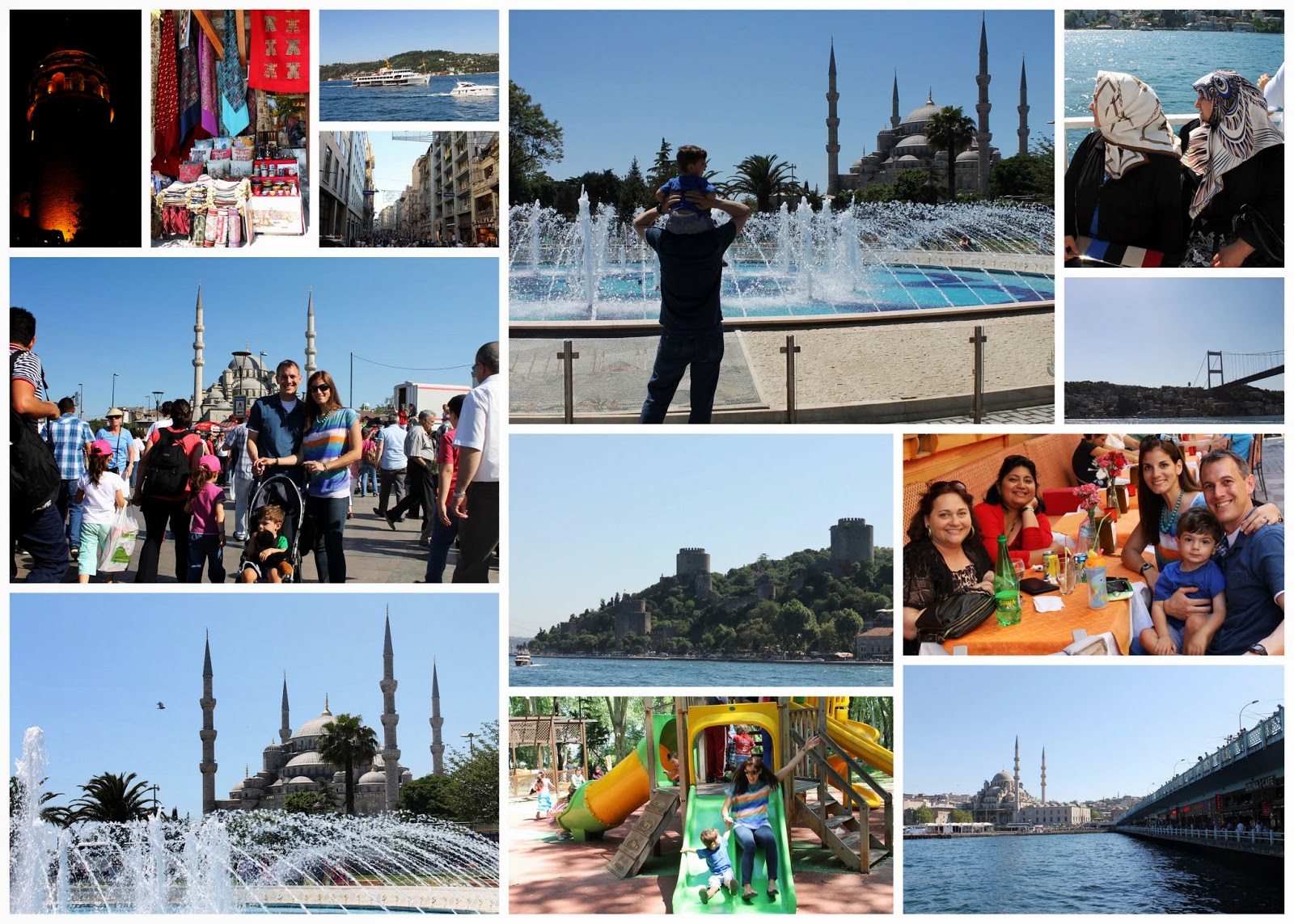