Last weekend, S and I took a time out from packout planning and everything Foreign Service related so that we could enjoy what we considered our "last hoorah" in New York City.  Okay, not really.  Because of our child-like excitement, all our conversations still revolved around Foreign Service-y stuff, but we did get to enjoy a weekend of gluttony, and one solitary evening sans toddler.

S and I have tried very hard to have a "once-a-month" date night since E entered the world, but a little thing called life often intervenes and disrupts our adult time.  But since we're leaving in a few short weeks, I insisted that we have one last adult evening in New York.  S agreed, so we called in the sitter.

We had dinner at a local Italian restaurant in Clinton Hill called Locanda Vini e Olii.  This restaurant has been along our running route for the past 3 years, but we never really gave it much thought mostly because of the sign out front.  It still reads Lewis's Drug Store, a hold over from the days when the building used to be a pharmacy.  Needless to say, we had no clue there was a fine dining experience awaiting us within. I'm glad we figured it out though, because the food was delicious. A perfect spot for our last great meal in Brooklyn.

We ordered the chicken liver with risotto appetizer, then we each had a "primi" pasta dish.  For the main course, S had the seafood stew and I had the grilled duck with chick peas and fig preserve.  Amazingness.

﻿
﻿﻿
After dinner, S and I took a stroll down to the Promenade and grubbed a chocolate, sea salt and caramel cupcake from Crumbs while looking out at the skyline.  We took a few trips down memory lane, both of us admitting that we never in a million years would have imagined getting to such an exciting and awesome point in our lives.  It eventually got too chilly on the water and I was wearing a sleeveless dress, so we called off the remaining romantic gestures, opted for the warmer confines of our car and headed home.

Since Sunday was Father's Day, S (and by proxy, I) got a two-for-one on the food-o-meter.  It was the third Sunday of the month, after all, which meant--Food Truck Rally!  We tucked E into the Bob stroller, quickly logged our 5-miles to burn off the previous night's meal, and then high tailed it back to Grand Army Plaza for some more grub.

S and I both had some empanadas followed by a few dumplings and one giant buffalo chicken/mozzarella grilled cheese sandwich from one of the most (if not THE most) famous grilled cheese truck in the city, Gorilla Cheese.
﻿
﻿ 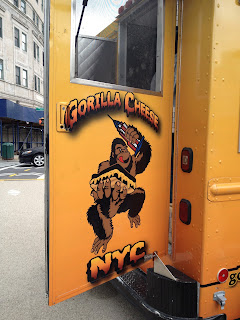 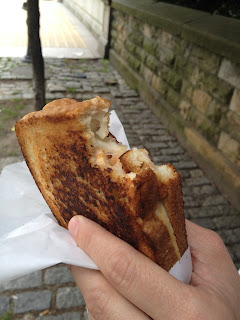 See what I mean?  Totally gluttonous weekend.  But in the end, S and I had an amazing "last hoorah" in the city and S had a memorable, food truck inspired Father's Day feast.

Now we can go back to our regularly scheduled programming of packout lists, tenant/landlord preparations, pet care logistics etc.  Because one burning question remains unanswered: Just how DO you get one future diplomat, one stressed-out spouse, a rambunctious toddler, a hyper dog and an angsty cat down to D.C. in one piece?  Well, I'll let you know when we find out.
Posted by L-S-E at 7:32 PM